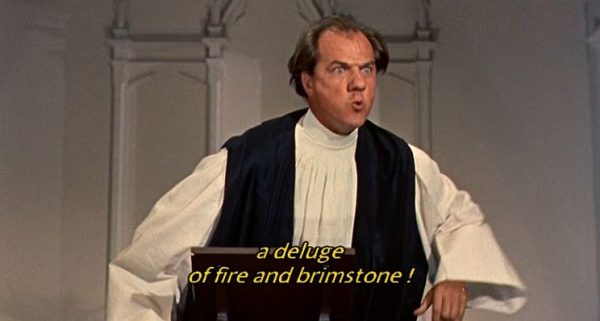 This article consists more of a series of “what ifs” and wonderments than of outright answers. I read someone’s comments on Facebook that got me wondering. The gentleman stated that we Latter-day Saints, as modern-day Israelites, lacked the hellfire and damnation preaching that always saved Israel in the past. His concern seems to be centered around the Brethren’s lack of forcefulness when it comes to hard preaching of repentance to the people. His fear seems to be that mediocre and gentle preaching of our need to be better people is only creating a soft and mediocre people who never truly repent and never truly measure up to the status of a converted people.

Ancient Israel was always a fickle mistress. The prophet Hosea was instructed by the Lord to preach to the people that in the covenant marriage relationship, the relationship between God and his people was that of a faithful husband and an adulterous wife. Ouch! Over and over again the Lord forgave his wandering people. Spiritually speaking they were all over the map. He had given them the Law of Moses to teach them of his mercy and to look to the day when he would come and spiritually save his people. But Israel kept wandering off the path by choosing to worship other gods. Their constant rebellions finally got them scattered all over the earth.

Despite their current condition, that of being scattered to the four corners of the globe, they were promised by their faithful God that the day would come that he would find them and gather them back into his protective embrace. This is the work the gentiles have been enlisted to do in the last days. We are the gentile nations that have been enlisted by the Lord to find the descendants of ancient Israel and bring them back into their covenant relationship with their God.

Those of us who are not the native blood of Israel are adopted into the family of Israel at baptism. It is our responsibility to seek out and bring in all those we can find who are the progeny of ancient Israel, and anyone else who is willing to make the covenants of baptism. The question is, are we the same as ancient Israel? Are we just as fickle as they were? Are the conditions in the last days the same as they were back then?

The expectations of the family or house of Israel are certainly different. They were never required to do missionary work. They were, instead, required to keep to themselves in order to remain pure and unsullied from the world around them. We, on the other hand, are all about missionary work and mingling with every culture and people on the planet as we seek out the Lord’s ancient covenant people.

Anciently, the prophets constantly had to threaten the people with either destruction or being scattered as a nation in order to get their attention and get them to repent. Either that or they had to curse them until they repented. They were, at various times given boils, famine, pestilences, enslavement through being conquered, plagues, etc. Most of the ancient prophets were not real popular people. They were constantly preaching death and destruction to the people. Yes, there were times when the people behaved themselves and enjoyed a generation or two of peace, but those were the bright spots in the Israelitish landscape. Most of the time the records give us accounts of their backsliding ways.

Are we just as bad? I question this. It is certainly true that since the restoration of the gospel to the earth the Lord’s people have gotten themselves into a lot of hot water, but there is little to directly compare here with ancient Israel. Ancient Israel had several thousand years of tradition and prophetic teachings to go by. Modern Israel (the Church of the Restoration) was originally comprised of nothing but converts from various Christian faiths. None of them knew anything when they were baptized about what the Lord expected of his people or how to behave as covenant makers and covenant keepers. There was no Church culture to fall back on when questions of propriety or procedure arose. All the habits, predispositions, and assumptions of their old false religious doctrines had to be slowly weeded from their consciousness so they could begin to think like real latter-day saints.

As I thought about the differences between Israel past and Israel present, it occurred to me that we seem to have a very different kind of relationship with the Lord than they did. Anciently they were not given the privilege of holding the priesthood. Only the prophet and a small handful of men were given any responsibility of any kind. But we are a generation of high priests. Every worthy male member is expected to hold priesthood offices and fulfill callings within the Church. And our women fulfill so many participatory and leadership roles that would have been unthinkable anciently.

As a generation of high priests, we are expected to study the scriptures daily, something ancient Israel did not have the capacity to do. Books, as we know them did not exist. We have the writings of the modern prophets delivered to our homes each month in the form of Church magazines. We have conferences on a regular basis where priesthood leaders, often including the apostles themselves come and teach us. We have constant communication from the prophet and the headquarters of the Church. None of this was possible with ancient Israel.

I believe the Lord has greater respect for the covenant makers in modern-day Israel. We have been given great responsibilities in the last days, and even if we aren’t being particularly stellar at how we are carrying out our charges to gather Israel, we are doing good and not rebelling as a people, like ancient Israel kept doing. Is it possible that the Lord doesn’t need his prophets to preach hellfire and damnation in order to get our attention? Is it possible that as we become gradually more and more converted that we are able to be encouraged to be better today than we were yesterday, and the Brethren’s encouragement will be enough to get us to do it? I don’t know. What do you think?

Many of us were raised with the mentality of the Southern preacher’s hellfire and damnation, Bible thumping sermons. People went home from those sermons with the fear of God instilled in them. He was not portrayed as a God of love, but of vengeance and punishment for those who did not obey. Considering our relationship with the Lord today, will such a portrayal work to motivate the saints of God to greater action? Will fear just be the ticket? I’m not sure how that would work, exactly.

The more I thought about my conversation regarding the soft approach the Brethren take, versus the fear and trembling approach by others or by the ancient prophets, the more at peace I feel with the gentler, kinder teaching of the Brethren. I keep thinking of President Russell M. Nelson’s comments about changing the old home/visiting teaching program to ministering. He said, “we will implement a newer, holier approach to caring for and ministering to others.”

President Nelson’s comments, along with all the talks given during the historic April, 2018 General Conference, were gentle, kind, and holy. This is a Church of hope. It is a Church of love and appreciation. We don’t focus on punishment and damnation. Yes, damnation is always, and has always been the only alternative to failure to obey, but our focus is on the prize, eternal life, not the punishment for failing to achieve the prize.

I believe that modern-day Israel (the Latter-day Saints) has some fundamental differences that sets us apart from ancient Israel. We are on a much more intimate standing with the Lord today than they could have been. Our prophet told us back in that April Conference that “In coming days, it will not be possible to survive spiritually without the guiding, directing, comforting, and constant influence of the Holy Ghost.” We are all expected to have constant revelation. The Lord expects more of us than he did of ancient Israel. This is a different day and time. Do you think we would materially benefit from our leaders taking a hard line approach and railing on us to repent by threatening us with hellfire and damnation? How do you think modern Israelites would react to that?