Does God Always Spare His Prophets?

Does God Always Spare His Prophets? 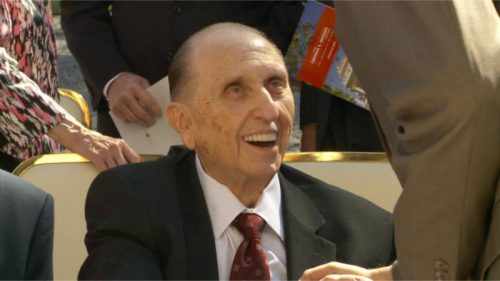 The title of this article is, of course, not fair. Anytime someone uses always or never as the basis for a question, the answer is pretty consistently, no. But the question is based on one that occurred to me as I was compiling an e-book on the special nature of each of the prophets of the Restoration. How did our prophets die? Did they suffer leading up to their deaths? Or did God spare them the pains of normal mortal exits because they were His prophets?

A look at past prophets

Here is a list of all the past prophets of this dispensation and how they died. I know, that isn’t something most people think about or spend the time to look up. But I did both.

John Taylor – Died of congestive heart failure (peaceful death). But it was said of him that he died as a double martyr, since he was severely wounded at the murder of Joseph and Hyrum Smith in Carthage jail, and he died for his beliefs living in hiding from those who wanted to arrest him for living the law of polygamy.

Joseph F. Smith – Died of pneumonia and pleurisy at home

Heber J. Grant – After a series of strokes, which restricted his activity, died five years later due to incidents of old age. He died peacefully at home.

Harold B. Lee – Died at home of an acute pulmonary hemorrhage. He lost so much blood internally that he became oxygen deprived, turned blue, and suffocated.

Gordon B. Hinckley – Died of cancer at home, with his family about him.

As I looked at the list and considered how many died by suffocation, I began to wonder if that was significant. Then I realized that anything that stops the heart or interferes with breathing will lead to suffocation. I suppose that happens to a lot of people when they die.

The rest of the story

Looking at the list of how each prophet died tells us immediately that the Lord does not spare His servants from physical pain or distress at their time of death. But what about before death? Does He cut them any slack because they are doing His work for the salvation of His children? Do the prophets get an easier ride through life than the rest of us?

Let’s look at just a couple of the prophets to see how comfortable their ride through life was.

Howard W. Hunter – President hunter had at least seven hospital stays in the last 10 years of his life. Most of his trips were for major surgery which left him in almost constant pain afterward. If you remember that time when he was speaking in Conference and he fell over backward into a plant stand, they retrieved him and propped him up and he continued his talk like nothing had happened. What most people are not aware of is that he also broke three ribs in that fall.

Gordon B. Hinckley – He lived with cancer for two years before his death. During that whole time he said not a word to the people he served. He continued to fulfill his calling until a week before his death when he just couldn’t make it to the meeting of the Quorum of the Twelve.

Wilford Woodruff – “He suffered broken bones in his arms and legs, split his foot with an ax, was bitten by a rabid dog, and was crushed and pinned by falling trees. He nearly lost his life from blood poisoning when he accidentally cut his arm while skinning an ox that had died of poison. He survived the wreck of a speeding train, nearly drowned, was frozen and scalded, and suffered several severe illnesses.”

I think these three serve to answer the question as to whether the Lord made the prophets’ lives easier because of who they were and what their callings would be. In the case of President Woodruff, I think he was attacked by Satan, who wanted him dead. He was spared over and over again by the Lord.

Why were they not spared?

I asked myself this question again and again. If they were on the Lord’s errand, and in so many cases He spared their lives, why did they have to suffer in so many ways? Not all the prophets had as many physical trials as President Woodruff, but you can’t live to be in your late 80s or 90s without something inside you breaking down.

While I was pondering this question, a new question came into my head. Did He spare His own son? The answer consists partly that yes, He did, in that no one was allowed to take the Savior’s life. But our Father in Heaven certainly didn’t spare His own son any of the trials and suffering required for Him to fulfill His divine calling.

Everything we suffer in mortality can be used to develop within us traits that are godly. To deny us the chance to experience these opportunities would be to tell us that He doesn’t want us to learn to be like Him.

In Doctrine and Covenants 122:7 the Lord put it to Joseph Smith this way:

7 And if thou shouldst be cast into the pit, or into the hands of murderers, and the sentence of death passed upon thee; if thou be cast into the deep; if the billowing surge conspire against thee; if fierce winds become thine enemy; if the heavens gather blackness, and all the elements combine to hedge up the way; and above all, if the very jaws of hell shall gape open the mouth wide after thee, know thou, my son, that all these things shall give thee experience, and shall be for thy good.

With the Lord talking about the jaws of hell, I’m sure something like physical illnesses and calamities are also included in His implied list of all bad things.

The question is how we treat our mortal misfortunes. Do we mourn our own bad luck or do we seek to learn what we can from the experiences we go through and try to become more godly in the process?

Does the Lord seemingly turning a blind eye to the sufferings of His people or His chosen servants make Him a meany? I think not. He, of all people understands that mortality is a trial from first to last. Everything about our time on earth is meant to make us into the kind of people who can live comfortably with God one day. To deprive us of any of those teaching moments would be self defeating for God’s goal of bringing to pass our immortality and eternal life, and would deprive us of precious (yes, I said it) opportunities to learn to be more like our Savior.

Christ suffered everything the Lord and Satan could throw at Him for the salvation of God’s children. To become more like Him we must each learn to deal with our physical challenges and develop Christlike attributes from the patience and longsuffering our challenges bring us.

Thanks be to God for giving us such wonderful examples of how to continue to serve and grow in spirituality. Our prophets are mere mortals, but they each have a divine core, just like the rest of us. They are devoted to God’s work and will continue to push through whatever they have to to get the Lord’s work done. How about us? What are we willing to do?

Does God Always Spare His Prophets