Just Serve is a Church sponsored opportunity for all members of your community to post their needs for helping others.

This lesson has three objectives, to encourage each of us to participate in the government under which we live, to obey the laws of our land, and to strengthen our community. The Lord wants each of us to be good citizens. This is good for us and good for the country in which we live.

Something I learned in the last few years has a bearing on the contents of this lesson. A nation with people who have been taught strong religious values is a nation at relative peace. Their religion teaches them to obey the laws of the land, to respect authority, and they learn to practice good citizenship in the home and from teachers in their churches. They also tend to watch out for their neighbors and care for each other, largely because their religion teaches them that it is important to do so. In short, people who are strongly religious tend to police themselves and live more peaceably with their neighbors.
A country that turns from God no longer has guilt or any other code in place that prevents individuals from acting against the interests of their nation. People lose their sense of moral and social shame, their sense of community, and their patriotism. They act for their own self interest, and in their growing disrespect for their country, flag, and government, the peace-keepers who police the laws and patrol the land are increasingly seen as the enemy. This is what we have been seeing first hand in the United States and elsewhere in the world.

In August of 1835 the Church approved the inclusion of Section 134 in the Doctrine and Covenants. It is thought that Oliver Cowdery wrote it, but no one is certain. However, Joseph Smith referred to it and quoted from it a number of times, so it is considered amply approved. This section lists the purpose of having civil governments. The four main reasons are listed here.

Notice that none of the reasons for having a civil government have anything to do with what the people believe and choose to worship or how they worship. This is the separation of the church and state. The role of the state is to ensure that the people are able to worship what and how they wish. But they shouldn’t be influencing the what and how of that worship. Likewise, we believe that the churches shouldn’t be influencing the punishment of criminals, etc.

Our responsibility to the broader community

Every country’s citizenry has varying degrees of freedom to participate in what goes on in their particular government. Elder L. Tom Perry of the Quorum of the Twelve had this to say about our responsibility to our country:

“As Church members, we live under the banner of many different flags. How important it is that we understand our place and our position in the lands in which we live! We should be familiar with the history, heritage, and laws of the lands that govern us. In those countries that allow us the right to participate in the affairs of government, we should use our free agency and be actively engaged in supporting and defending the principles of truth, right, and freedom” (in Conference Report, Oct. 1987, 87; or Ensign, Nov. 1987, 72).

Here is a quote from Elder M. Russell Ballard of the Quorum of the Twelve:

“In the Church, we often state the couplet, ‘Be in the world but not of the world.’ … Perhaps we should state the couplet … as two separate admonitions. First, ‘Be in the world.’ Be involved; be informed. Try to be understanding and tolerant and to appreciate diversity. Make meaningful contributions to society through service and involvement. Second, ‘Be not of the world.’Do not follow wrong paths or bend to accommodate or accept what is not right. …

“Members of the Church need to influence more than we are influenced. We should work to stem the tide of sin and evil instead of passively being swept along by it. We each need to help solve the problem rather than avoid or ignore it” (in Conference Report, Apr. 1989, 100–101; or Ensign, May 1989, 80).

The parts of these two quotes I find most important are as follows:

The Lord has said that we need to be anxiously engaged in a good cause. He didn’t specify which cause. Any good cause will do. His point is that we are agents unto ourselves, and as such it is our responsibility to seek to do good wherever we can, just as the Savior does good at any opportunity, without compulsion or having to be asked. He does it because it is in his nature to do so. It needs to become part of our nature as well. Here is the scriptural reference. It is found in Doctrine and Covenants 58:27-29.

27 Verily I say, men should be anxiously engaged in a good cause, and do many things of their own free will, and bring to pass much righteousness;

28 For the power is in them, wherein they are agents unto themselves. And inasmuch as men do good they shall in nowise lose their reward.

29 But he that doeth not anything until he is commanded, and receiveth a commandment with doubtful heart, and keepeth it with slothfulness, the same is damned.

2. The second point from the quotes above is that we cannot help but be in the world. It is just where we live. We cannot escape the world. But we cannot ignore it either. Our responsibility is to “make meaningful contributions to society through service and involvement.” Look below for some meaningful ways we can make contributions.

3. The third point is that too often we tend to let the world influence us, instead of the world being influenced by us. We are not to be passive in this life. The Lord has given us all the tools we need to become a movement and influence for good to those around us. If we spend our lives hiding behind the skirts of those who do what the Lord has told all of us to do then Doctrine and Covenants 58:29 may apply to each of us. (This verse is printed here two paragraphs up)

What can we do?

There are charities in your town and country that need volunteers. Use the Internet, newspapers, word of mouth, ads, and other printed materials to find them. And when you volunteer for something, don’t just become a drone, doing only what is commanded or required of you. Find ways to make your assignment better and more effective. Go the extra mile, be happier than anyone else on the staff – you have reason to be.

Have you looked into www.justserve.org? This is a Church-sponsored program that let’s organizations in the community post their needs for volunteers and people with expertise to help them with their projects. Churches can post fundraisers and outreach programs, civic clubs, especially with ongoing projects can post to look for contributors and volunteers, etc. This is a way for the whole community to post in a single location and everyone who wants to get involved can go there and pick and choose what they want to help with. In my town of Rexburg, Idaho, USA, I can spend two hours a month feeding breakfast to the war veterans at the local VFW chapter. Look at the image below to see just a few of the opportunities open to any member of my community through Just Serve. 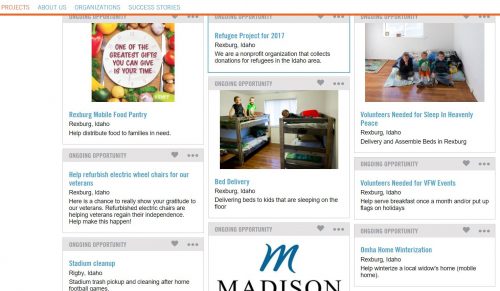 My point is that there are many ways we can join good that is already in progress. Someone else has already done the hard part and gotten it going. All we need to do is join in the process of helping others. The Lord promises that as we do what we can to help our government and our communities improve – as we do what we can to spread the influence of the Spirit among our neighbors by laboring in their midst, we will not lose our reward. That is sort of a backwards way of saying we will receive great blessings.

I would love to hear from you in the comments below about service opportunities or ways to be a good influence where you live. We would all profit from hearing how others are accomplishing this directive from the Lord. There are so many blessings to be had, but most of the time those blessings require that we at least walk out our front door and interact with those who live in Babylon and don’t know there is something better awaiting them.