D&C Lesson 34 – Faith in Every Footstep

D&C Lesson 34 – Faith in Every Footstep 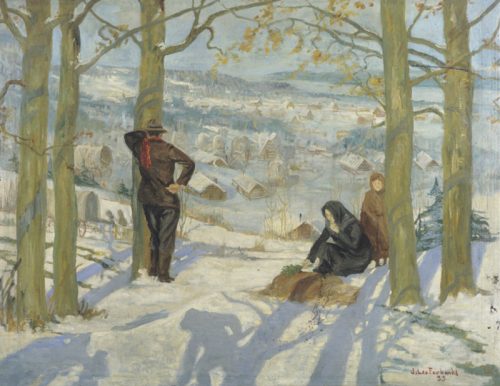 The objective of this lesson requires an entirely new approach to the way I have always thought about the pioneers as they left Nauvoo. I have relatives that this lesson even discusses in that group that left Nauvoo, but I never once stopped to consider the social dynamics of those fleeing refugees and how they actually thought or lived the gospel as they slogged across the alternating frozen/muddy ground of Iowa in the winter of 1846/47. It is the faith that went into their footsteps that we consider today.

The exit from Nauvoo was planned. It was anticipated. It was not that they were raided one night and forced out by surprise attack. They were planning this for months. Yes, it happened ahead of schedule, but there were still plans in place for how it was to happen.
Brigham Young had 300 men selected for an advance group that would go ahead of the main body of saints. They would leave no later than the middle of March when the grass would start to grow so their cattle and horses would have food to graze on as they traveled. They would move ahead and get to their destination early so they could break ground and sow fields so that the saints who followed later in the season would have food to eat when they arrived.
That was the plan. But you know what they say about the best laid plans of mice and men … . In the pushed-up schedule, due to the mobs coming early to prevent the saints from getting away, the people decided they needed to be with their leaders, instead of traveling with the companies they had been assigned to. As a result, instead of Brigham Young and his 300 there was Brigham Young and his 7,000. Chaos.
People were not properly prepared. There were those who were too poor and ill equipped to travel. There were those unwilling to share and help those who couldn’t help themselves. There was bickering, complaining, confusion as to what was supposed to be happening. You get the general picture. Instead of the advance vanguard reaching the Rocky Mountains by summer and planting crops, the extra people slowed their progress to sometimes less than 2 miles a day. They never made it past Winter Quarters, Nebraska. They were a good 1,000 miles away from their goal and winter was upon them.
By the time they arrived at Winter Quarters they had people living in caves, dugouts, tents, or sleeping in their wagons. Because of the lack of basic knowledge of what caused cholera (water or food infected by bacteria from human waste) the camps became rife with victims during the winter. Hundreds died. Those with mild cases served to spread the infection to others who might contract a severe case, which could lead to death in a matter of hours. Sanitation was a big problem, especially for large groups who were ill fed, weak from exposure and lack of food, or were already sick from something else. The main cure lay in rehydrating those who were sick, but there wasn’t any clean water to give them.

These conditions caused a crisis of faith for many. They had lost everything, their homes, farms, businesses, family members, and in many cases, their hope. The loss of their hope was arguably their most devastating  problem. They didn’t know what awaited them, and they didn’t have anything to return to.
Brigham Young worried to the point that he lost so much weight he could no longer wear his clothes. He prayed and prayed for an answer to all the problems that faced the saints at this time. That was when, in January of 1847 he received what is now Doctrine and Covenants 136.

More than just an organizational plan

When we read Section 136 we see mainly the organizational line items that there needs to be captains of 100, 50, and 10s – that kind of thing. But to the saints, and especially to Brigham Young, this was the lifeline he needed to change how everyone looked at what was going on. This revelation changed their perspective and made the journey as much about how they lived the gospel as it was about how they would reach their destination.
The organization into companies of 100/50/10, etc. had only been loosely followed, and people tended to meander from group to group and didn’t follow closely what they had been taught. That changed. As they proceeded across the prairies they were committed to stay with their company. This promise to stay and become a cohesive group changed how they looked at the journey. It was no longer “every man for himself,” but “we look out for each other.”

Brigham came to understand that rather than simply blazing a trail that others would follow, the 1847 vanguard company was establishing a covenant path. Thus, all those who were to make the journey were to travel “with a covenant and promise to keep all the commandments and statutes of the Lord” (D&C 136:2). The revelation further declares, “This shall be our covenant—that we will walk in all the ordinances of the Lord” (D&C 136:4).

They were now bound for the journey by covenant to keep the commandments and watch out for each other’s welfare. This was a binding process that helped to knit the saints into communities of saints who were dedicated to each other’s mutual welfare. Everything about this came through the covenants they had made at baptism and in the Temple before leaving Nauvoo. It was the Temple covenants they were being required to keep in this time of communal need.

Other defining characteristics of the covenant path included the reminder for the Saints to assist those in need by bearing “an equal proportion, according to the dividend of their property.” The charge also included the Lord’s promise to the Saints if they willingly did so: “You shall be blessed in your flocks, and in your herds, and in your fields, and in your houses, and in your families” (D&C 136:8, 11). The virtues of patience, humility, and gratitude in keeping covenants and attending to temporal stewardships outlined in the revelation would also assist the Latter-day Saint pioneers in settling the wilderness, establishing new homes and communities, and laying the foundation for a church destined to fill the world.

Everything about their journey changed. They now saw that it wasn’t just getting from point A to point B that mattered, but how they lived as they went from A to B that mattered. They now had hope, a higher purpose in the struggles they were to face. Sacrifices became a purifier of faith, not just a necessity.
The following spring when they moved out they went with a completely different attitude. The revelation commanded them to be happy, to sing, and even to dance, which was generally considered to be evil at that time in history. Brigham Young saw to it that they had time to enjoy life, even in the midst of hardship. Each night, whenever they could, they sang hymns and songs to lighten their spirits. They even danced around the fire. This gave them a chance to socialize and meet people, to bond with one another.
With hope restored, order restored, and purpose in the journey, the saints were ready to face the hardships of crossing the plains. This made the loss of loved ones bearable. It made the hunger and privations tolerable. They now saw that the sacrifices they were being called upon to make right now was for a grander cause, the settling of God’s people in safety in the Rocky Mountains. They were part of something bigger and loftier than their own private needs. And they sacrificed joyfully.

Where do we stand?

We aren’t any different from those who crossed the plains. We don’t have wagons that need to be pushed or pulled across a thousand miles of prairie or mountain, but we have daily struggles with temptations and the call of the world trying to rob us of our perspective and hope.
This is all about our Temple covenants folks. This is about how the Lord wants us to view our mortal journey back to our Father in Heaven. What the saints went through is a physical representation of what we are required to individually go through in our spiritual journey back home.
What saved them will also save us. They were committed by their covenants to stick together. They covenanted to watch out for each other and stop thinking only of themselves. They became a community dedicated to watching out for each other’s welfare.
They learned that even in the most trying of circumstances joy can be found. It is good to take time to be happy. Sing a little. Dance a little. Do things for each other, and find joy in the doing of good things. Yes, death happens along the way. Sometimes the trials can become severe, but the journey is not about the individual privations, but about the destination and the joy to be found in being obedient to God’s plan for our happiness.
Like the saints in 1847, who had to have a change of perspective to go from despair to being filled with hope and joy, so too do we need to see that their physical journey is but a representation of our spiritual journey to our promised land. That isn’t supposed to sound corny. It is true. Only when we stop focusing on the reality of the mortal experiences that surround us, and start focusing on our goal to get back home to safety, to the arms of our Savior and our Father, will we begin to see that our covenants to become unified as a people, as a neighborhood or a ward, show us how to find joy in the journey.
Kelly Merrill2017-08-10T18:53:41-06:00Doctrine & Information, Free Lessons & Materials|4 Comments