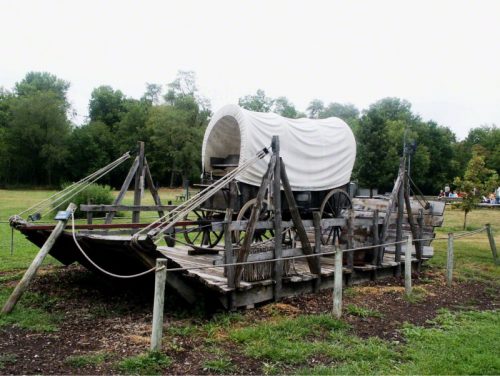 The double topic for this lesson combines the succession in the Presidency and Brigham Young’s efforts to move the Saints west to the Rocky Mountains. Brigham Young is at the heart of both topics.

The hatred of Joseph Smith by a few people prompted the formation of an anti-mormon political party. They flooded the newspapers with calls for Joseph’s death, telling everyone that the Mormon problem would go away as quickly as they could dispatch their leader. It became an effort to find a way to kill Joseph Smith without being tried for murder. Hence the mobs. They were spurred on by those out to see the end of Joseph Smith and his religion.

The governor promised Joseph he would be safe if he would submit to being tried by a jury of non-mormons over the latest accusations brought against the leaders of the Church. Governor Ford was well aware that the promise of safety he made to Joseph Smith couldn’t be kept. He didn’t have enough control over his own militia to make such a promise.

The governor’s promise was not kept. The mob came and killed Joseph and Hyrum Smith, and then fled so as not to be answerable for what they had done.

All my life I was under the impression that the Saints decided to move west because the Prophet had been killed, and they didn’t know where else to go to avoid the persecution from the mobs. Joseph Smith died in June of 1845, yet the leaders of the Church had been contemplating a move to the Rocky Mountains since 1834, twelve years earlier.

“As persecutions in Nauvoo intensified, it became apparent that the Saints would have to leave. By November 1845, Nauvoo was bustling with the activities of preparation. Captains of hundreds, fifties, and tens were called to lead the Saints on their exodus. Each group of 100 established one or more wagon shops. Wheelwrights, carpenters, and cabinetmakers worked far into the night preparing timber and constructing wagons. Members were sent east to purchase iron, and blacksmiths constructed materials needed for the journey and farm equipment necessary to colonize a new Zion. Families collected food and housekeeping items and filled storage containers with dried fruits, rice, flour, and medicines. Working together for the common good, the Saints accomplished more than seemed possible in so short a time.” (Our Heritage Manual)

What is significant here is that the move West was not spur of the moment. It was something long thought about and well planned for. What was not counted on was the timing. They had hoped to have several more months of preparation, but the mobs were not about to let them have the time they needed. They wanted the Church dispersed or destroyed before they could have a chance to move West.

The Lord knew that Joseph would have to seal his testimony with his blood. Joseph also knew that he would die an untimely death. “On at least 19 different occasions, beginning as early as 1829, Joseph Smith told the Saints that he would probably not leave this life peacefully” (Our Heritage Manual). His own comment on the day he left for Carthage jail showed that he had every confidence he would not be returning. “I go like a lamb to the slaughter.”

For some time before he went to Carthage Joseph had been concerned about the keys of the kingdom and that everything be put in readiness for the day he would not be there personally to guide the Church.

In Nauvoo in the winter of 1843–44, the Prophet Joseph Smith spent several days giving the Quorum of the Twelve their temple endowments and teaching them about their responsibilities. He told the Twelve that he had been concerned that he would soon die without having bestowed the keys of the kingdom on others. Wilford Woodruff, who was a member of the Quorum of the Twelve at the time, recalled the following words from the Prophet Joseph:

“Now, brethren, I thank God I have lived to see the day that I have been enabled to give you your endowments, and I have now sealed upon your heads all the powers of the Aaronic and Melchizedek Priesthoods and Apostleship, with all the keys and powers thereof, which God has sealed upon me; and I now roll off all the labor, burden and care of this Church and Kingdom of God upon your shoulders, and I now command you in the name of the Lord Jesus Christ to round up your shoulders, and bear off this Church and Kingdom of God before heaven and earth, and before God, angels and men” (in James R. Clark, comp., Messages of the First Presidency of The Church of Jesus Christ of Latter-day Saints, 6 vols. [1965–75], 3:134).

I have included this quote because it shows that the Church members may not have known who was supposed to lead the Church after the death of the Prophet, but the Quorum of the Twelve knew. They may not have had a perfect understanding, but they knew enough to know that they held the keys to the priesthood power, and it was their responsibility to lead the Church once the quorum of the First Presidency was no longer.

Shortly after the members of the Quorum of the Twelve began arriving back in Nauvoo from their missions abroad, they held a meeting to discuss who was to lead the Church. Sidney Rigdon, who had over the previous year gone astray, told the members of the Church he had seen a vision wherein he was to be made the Guardian over the Church.

Brigham Young told the people they needed to know what the Lord had to say on the subject. Here is what happened when Brigham Young got up and addressed the Saints.

As Brigham spoke, George Q. Cannon remembered, “it was the voice of Joseph himself,” and “it seemed in the eyes of the people as if it were the very person of Joseph which stood before them.” William C. Staines testified that Brigham Young spoke like the voice of the Prophet Joseph. “I thought it was he,” Staines said, “and so did thousands who heard it.” Wilford Woodruff also recalled that wonderful moment and wrote, “If I had not seen him with my own eyes, there is no one that could have convinced me that it was not Joseph Smith, and anyone can testify to this who was acquainted with these two men.” This miraculous manifestation, seen by many, made clear to the Saints that the Lord had chosen Brigham Young to succeed Joseph Smith as leader of the Church.

There are probably a number of reasons for not making Brigham Young the prophet immediately after Joseph’s death. Among those reasons was the fact that everyone was still in mourning over having lost their beloved prophet. Joseph was the one and only prophet anyone had ever known. Somehow just immediately putting someone in his place and carrying on just didn’t seem to sit right with anyone.

He didn’t get ordained President of the Church for another three plus years after they had been in the Salt Lake Valley for a time. Brigham Young’s successors followed this same custom until the Lord told the prophet not to wait, but to organize the new presidency immediately. It has been done immediately upon the prophet’s death ever since. And it is always the senior apostle who becomes the next Prophet.

The Brethren had sent people ahead of the Church to western Iowa and eastern Nebraska, and to settlements along the way there to begin to get ready for the Saints’ migration West. People were called to plant crops and build small huts and houses so people would have places to stay and food to eat when they traveled toward the Rocky Mountains. Unfortunately, they had to leave earlier than they had planned.

Brigham Young had helped to shepherd the Saints from Missouri to Illinois when they were driven out by mobs a few years prior. This was not the first time he was called upon to organize the people for a trek. They had done this before, and on a tight time schedule too.

One of the major activities in their preparations to leave was to finish the temple so the people could receive their temple endowments before they had to abandon the temple. The Brethren worked night and day for weeks endowing nearly six thousand members before they absolutely had to close the doors and walk away from the temple. Some of the Brethren worked so many hours, for so many days in a row doing endowments that they had to leave the temple and go home to rest because their health was failing from the lack of sleep.

The people drew great strength from having received their endowments from the Lord in the temple. This helped them through the trials they had to face as they journeyed to their new home in the West.

Hopefully, as you discuss the trek in your class you will cover some of the miracles the Lord gave the Saints to help them on their way. Many died of cold, cholera, and other illnesses, but as a whole they were still optimistic and faithfully looking forward to arriving in their new abode of safety in the Rocky Mountains.