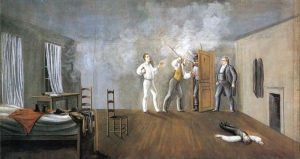 (labeled for reuse on wikimedia.com)

In this lesson your class teacher will, no doubt, discuss the events surrounding the martyrdom of Joseph and Hyrum Smith. So I would like to take this opportunity to have a brief look at what it means “to seal the testimony.”

The lesson is based on the tribute in the Doctrine and Covenants to Joseph and Hyrum Smith. It is found in Section 135. I have taken this article from a talk by Robert D. Hales given just days after the death of President Ezra Taft Benson as he spoke to the students at BYU Provo about the death and testimony of prophets. The quotes all come from his talk.

Scripturally, there are two main categories of martyrs, the prophets, and those who were not prophets, but were faithful members of the Church of God. Their deaths were what sealed their testimonies. What I want to talk about is what it means to seal one’s testimony, and I would also like to add an additional means in which one seals a testimony.

Let’s start at the top of the list. Prophets hold a special place in the plan of salvation. They are granted priesthood keys from the Savior Himself. Their responsibility is to bear witness of Him and to perform special works that assist the Godhead in moving forward the salvation of all of God’s children. It is a tremendous responsibility.

The scriptures teach us that Jesus was born to die. His death was a mandatory part of the plan. His death was required for a number of reasons, not the least of which was so that the punishments (judgments) that would be sent upon the Jews would be thoroughly justified.

In these cases it is the death of the prophet that becomes the last straw, if you will, that everlastingly tips the scales and sets the course for what follows. Such is the case with Joseph Smith. The Lord knew that the people would reject His message and kill His messengers, Joseph and Hyrum Smith.

These faithful men had done all in their power to be faithful to the responsibilities the Lord had given them, and their deaths was the stamp or verification of their faithfulness. There is a great deal of weight placed on where someone stands on an issue when they are at the point of death. Once you are at the point of no return, what is the use of keeping up a sham? That is why deathbed confessions are considered irrefutable. Many people who have lived with lies don’t come clean until they are in the process of stepping out of this world and entering the next.

That Joseph and Hyrum died fully vested in the gospel they preached, and were living its principles, and keeping its covenants right up to the moment of their deaths, seals their testimony. But what does it mean to seal a testimony?

I can profess a belief all day long. But at any point I can turn from that belief and do something else. I can betray what I have professed to believe in in a moment of weakness or fear and destroy all that I have stood for my entire life. But once I have passed through the veil, that which I have testified of and stood for my whole life becomes unchangeable in mortality. I have place my final testimony on the act that is my life by leaving mortality true and faithful to that which I have preached and lived all of my life. That is my seal or stamp of authenticity on all that I have said and done.

Just as Jesus was born to die, so too are some prophets born to give their lives for the testimonies they bear. But because they hold such a high and sacred position before God and all the children of man, their deaths are considered weightier, and there is a weightier punishment for their deaths, as well as a weightier glory for their sacrifice.

For both the Prophet Joseph Smith, Jr., and our Savior Jesus Christ it can be said, “Greater love hath no man than this, that a man lay down his life for his friends” (John 15:13).

True religious martyrs are part of an eternal gospel plan and earn an eternal reward: “Whoso layeth down his life in my cause, for my name’s sake [and the gospel’s], shall find it again, even life eternal” (D&C 98:13; see also Mark 8:35). The pioneers who gave their lives in the westward trek are martyrs also, but not in the same way as the prophet who held the priesthood keys and willingly gave his life in testimony to seal his work in this dispensation. Brigham Young gave this teaching about the martyrdom of the Prophet Joseph Smith:

For they killed the prophets . . . ; and they have shed innocent blood, which crieth from the ground against them. . .

Many have marveled because of his death; but it was needful that he should seal his testimony with his blood, that he might be honored and the wicked might be condemned. [D&C 136:36, 39]

Bringing it down a notch, not because there is any less of a sacrifice made, but because martyrs don’t hold the same positions of responsibility in God’s kingdom, and a life, after all, is a life, is the “regular” martyr. (If there is such a thing as a regular martyr.) As Elder Hales mentioned in the quote above, the pioneers who gave their lives to fulfill the Lord’s commandments to cross the plains, qualify as martyrs.

Martyrs are those whose lives are lost in the act of obeying God. Their lives might be taken by wicked people trying to hinder their work. They may die because, like the pioneers, they were being obedient, but in the process something happened that took their life. The main point here is that it was the wicked actions of others that resulted in their deaths.

If the Saints hadn’t been driven from their homes and left with nothing, most of those people who died on the plains would have lived. Their deaths sealed their testimonies. Their deaths also sealed the judgments of God upon those who drove them out of their homes. They died being obedient to the cause they had espoused. And you can’t be a martyr without having a cause to die for.

The rest of us

We are not martyrs. Hopefully, that will not be required. I don’t expect there are many who wish they could die for the cause of the Lord. It is hard enough just to deal with the everyday demands of being a covenant keeper.

… We don’t give our testimony and lives in death in the manner that Joseph Smith, the martyred Prophet, gave his life because that was part of his mission. Rather, we give testimony by devoted service in our lives each day to lift and to strengthen others.

We also bear testimony. We demonstrate our obedience to the Lord in all that we do and say each day. We are either living up to our professed beliefs or we are betraying our professed beliefs. The seal that is placed on our true feelings about the gospel doesn’t get affixed until the moment of our death. At that point we have concluded our mortal test and are judged by the Lord and sent to either the spirit prison or to paradise.

Hence the need to endure to the end. It is the condition of our souls at the time of our death, be it in a car accident or in a bed dying of old age, that determines the seal that is placed on our mortal lives when we re-enter eternity. Yes, we can still progress in the spirit world, but once we have left mortality our test is complete and cannot be changed.

This is why it is so vital that we prepare for eternity each and every day of our lives, so that when our time comes to return home, we are prepared for it, whether it comes today or many years in the future.

We talk of the legacy of our ancestors. We honor and revere them for the lives they led in mortality. But what about our own lives? We too will leave a legacy behind. But what kind of legacy? That will be determined by how much we choose to do to honor our covenants and keep the commandments.

The Lord has promised that those who are martyrs for His sake receive an eternal reward. We don’t have to die to receive an eternal reward, but we do have to live a life of service and sacrifice to be worthy of that same reward. It isn’t just dying that gets you that ticket home to the Father. It is dying while living up to the covenants we have made. It is the keeping of sacred covenants that qualifies us for eternal happiness. So it is what we do and how we live our lives every day that makes the difference.