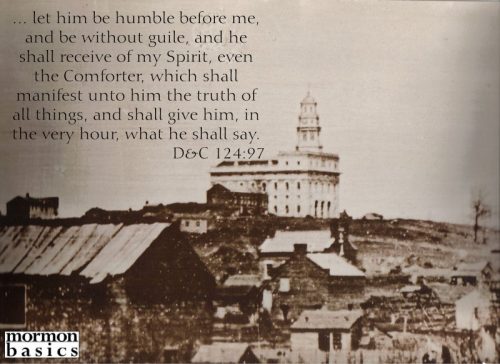 (labeled for reuse on wikimedia.com)

The saints in Nauvoo were a unique lot. Most of them had been driven from home to home, city to city, and from county to county. Many had lost the lives of their loved ones in the process. Almost all of them had lost property, both general and personal in the process of being uprooted and chased out of town. Yet those who helped to build Nauvoo were the faithful who continued to follow the Spirit and the prophet.

A spark of hope

Settling in Nauvoo offered something the opportunities in Missouri didn’t offer, a spark of hope that they could have enough political power to keep themselves safe from mobs. True, they had lost their opportunity to build Zion in the place designated by the Lord, but as they began to settle into Nauvoo the Lord designated their current location as the new gathering place. So all hope was not lost; they would just have to wait on the Lord for the official city of Zion to be built.

Just because they had their own city charter and could now raise their own militia to help protect themselves, it didn’t mean that life was rosy. Nauvoo means “city beautiful” with the connotation of it being a place of rest. For several years the residents did have rest from the persecutions they had experienced in Missouri, but they faced their fair share of challenges in those years of “rest.”

The city the Church bought and renamed Nauvoo was called Commerce, and it was mostly empty, and virtually uninhabited. It was also a swamp. When the saints moved in, the first order of the day was to drain the swamp to get rid of the plague of mosquitos. Malaria and other diseases caused many deaths until the swamps were gone.

Most of the important doctrinal revelations of the Restoration were received in the first half dozen years of the organization of the Church. Only a few revelations were received during the Nauvoo years, but section 124 is a notable exception. This section is not so much about doctrine as it is a revelation about redirecting the Church’s course, now that they had been kicked out of their places of refuge in Missouri.

The swamps were drained, and people were beginning to build their own homes, farms, and businesses. Section 124 of the Doctrine and Covenants directs the saints to prepare themselves for further blessings by building a temple in Nauvoo. In addition to the temple, they were also instructed to build the Nauvoo house, itself every bit the endeavor required to build the temple. So in addition to all the other things that needed to be built, they now had to build both a temple and a major structure. The Lord certainly wasn’t making it any easier on them.

There were also demands placed on the leadership of the Church. During their time in Nauvoo most of the Quorum of the Twelve Apostles were called to leave their families and serve missions in England. This was a miracle in and of itself. During the persecutions in Missouri many had fallen away from the Church. The Lord had prepared thousands of people to accept the gospel in England. In just a short year and a half, 26 branches of the Church were set up all across England, and more than a thousand saints immigrated from England to Nauvoo, greatly strengthening the saints there.

In addition to the apostles who were sent on missions, the Lord called a number of individuals to leave their families and go serve missions as well. Many future leaders of the Church were found and baptised during these missions.

The purpose of this lesson is “to teach about how the early Saints worked to build the kingdom of God in Nauvoo and to encourage class members to follow their example.” But we can’t learn from the early saints unless we can see how our position today is like theirs was.

A season of rest and building

The Nauvoo period was brief, but important in the growth of the Church. The members were finally able to catch their breath and enjoy each other’s company without fear of molestation by outsiders. It wasn’t for long, but it was a much needed period for them to bond and grow as a body of saints.

During the Nauvoo period they didn’t just work, work, work. They also were given some special blessings from the Lord. It was during this time that they were able to complete the temple and begin doing baptisms for the dead, so many were able to do work for their kindred dead.

The first endowments were given to the saints from the Nauvoo temple. This endowed the members with the spiritual strength they would need to continual faithful in the trials that lay ahead of them.

It was also the time when the Relief Society was organized under the order of the Melchizedek priesthood. This was the first time the sisters of the Church were able to perform their labors in the kingdom under the priesthood authority.

In section 124 the Lord promised certain brethren great blessings if they remained faithful. Unfortunately, there were some who still fell away from the Church and lost their blessings and their membership.

In many ways we are like those who lived in Nauvoo. We, as a Church, have gone through great periods of persecution and prejudice. It has taken a century of public relations to try to help people gain a better understanding of what we stand for and what we are about, and we are still fighting that uphill battle. There are still many who seek the destruction of all we stand for, so we aren’t in the clear yet.

Today the Church is experiencing the highest favor from the world it has ever known. But the world is quickly moving away from the standards the Lord set in the basic 10 commandments. The further away they move, the more out of step we will seem to be. That will not sit well with those who do not like to feel judged. One of the characteristics of the wicked is that they insist everyone else around them participate in their acts so they don’t feel bad about what they do. This will be a major source of persecution for us in the future.

During this time of peace the saints have had time to build the food storage and financial reserves the prophets have been preaching to us for more than a hundred years. The time is approaching when it will be too late to begin to save up and gather in because we will be needing what we have already prepared for the days of trouble.

The priesthood has been growing and maturing within the Church. More and more senior couples have been called upon to leave home and hearth and serve in various places of the world. And now there are many missions that can be served while still living at home.

The missionary age limit has been lowered, opening the way for many more Elders and Sisters to serve missions. New programs have been introduced in the Church, like the Pathways institution that helps people all over the world gain an education and training for a life’s work.

The point is this, the Lord has given us a period of prosperity, just like he did the saints in Nauvoo. He has demanded much of us, but in return has richly blessed us. What the saints of Nauvoo had was one temple. We have more than 150 operating temples, with more being announced all the time. There is spiritual strength granted through the covenants of the temple. We should take note that the Lord does not grant blessings until they are either earned or needed. With so much ready access to the power of the temple, we should probably be wondering what is coming that we need to be prepared for.

The Lord wants us to stop fearing what our neighbors will say or think, and speak up about the blessings He has to offer them. We need to become more fearless and more faithful in the performance of our duties to God. The saints of Nauvoo were blessed so richly because they stepped up to the plate and were faithful in fulfilling the commandments of the Lord.

I cannot rely on the other 15 million members of the Church to do the work the Lord is requiring of me. I alone am answerable for how well I keep His commandments. As you study this lesson keep this thought in mind. We have the example of our righteous forefathers. Are we living up to the demands of that same example?