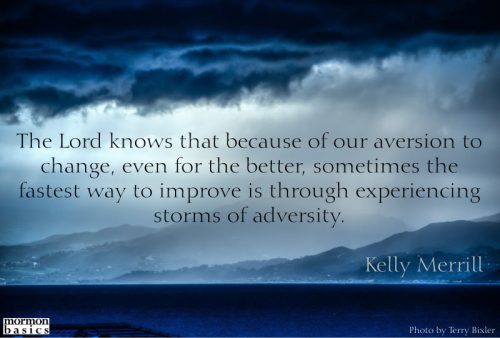 What will it take to establish Zion? Is it just a matter of getting the right piece of property and scraping together the money to build the new temple? The Lord says we will all have to be chastened and tried, even as Abraham. That’s a rather daunting thought. This reminds me of the lesson learned by the Grinch in Dr. Seuss’s book, “The Grinch Who Stole Christmas.” Perhaps Christmas isn’t just about paper, boxes, and bags. Perhaps it is about something much more. Perhaps Zion isn’t just about a given location. Perhaps it is about much more.

Zion isn’t just a place. Zion is made up of a kind of people, a people who have learned that there is nothing more important in life than the welfare of those around them. The saints in the early days of the Church had not yet learned this lesson. When they were sent to Missouri to establish Zion they approached it as an assignment to build a city, not build a people.

Like most of the lessons we have to learn in life, the Lord has given us sufficient instruction in the scriptures and through the prophets, but until we are spiritually in tune enough to actually see the lessons written on the pages we read, we misinterpret the lessons to mean something else and go merrily on our way, still uneducated in the finer things of the Spirit.

The Saints of Missouri

The main scriptural sections for this lesson are found in Doctrine and Covenants 101, 103, and 105. The saints had been sent to Missouri to establish themselves and begin building the city of Zion. But they did not understand that it takes a special kind of person to be able to live in such a city. As it happened, the current residents of the area became alarmed at the sudden influx of Mormons, along with their political views, which included an anti slavery leaning.

It didn’t take long for disagreements and resentments to surface and get fanned into full-fledged flames of anger. Mobs formed and they demanded the Mormons leave the area by the next Spring. The leaders of those in Missouri were hesitant to pick up and leave because they had just been told by the Lord’s prophet that they were supposed to be there, and they had just bought the land. But they agreed to leave. In the meantime they sent word to the Prophet to let him know what was going on.

When the mobs found out that the Mormons were trying to quietly go through the legal system to prevent having to leave that just made things worse, and homes were burned, people beaten, and some were killed. When word reached Joseph Smith, some six weeks later, he went to the Lord to ask what he should do. In the ensuing weeks, these three revelations were the gist of his conversations with the Lord.

Joseph had, at first only heard verbal accounts of what happened to the Church members in Missouri. Then the first letters arrived describing more about what the mobs had done to the saints. As you might imagine these were probably rather one-sided views of the subject. So the Lord filled Joseph in on the reasons behind the mobs and what the saints could and should do about it.

In Doctrine and Covenants 101:6-8 the Lord spells out the reason the people couldn’t build the physical city of Zion. They still weren’t a people of Zion.

Behold, I say unto you, there were jarrings, and contentions, and envyings, and strifes, and lustful and covetous desires among them; therefore by these things they polluted their inheritances.

Something tells me no one who came or wrote to tell the tale of persecution reported this behavior on the part of the saints to Joseph Smith, Jr. The Lord wasn’t rejecting the saints or their offerings to build Zion. What the Lord was pointing out was that they needed refining first. They were still His people, but they needed to be tried and perfected before they would be more ready to build what He wanted them to build.

Think about your own family, ward, or stake. Would these three verses describe those you go to Church with? I’m not saying you have any of those qualities, like being lustful, envious, or being contentious, but surely there are those in your family, ward, or stake who have that problem. So how much better prepared are we to build Zion than the early saints? How well have we learned the lesson the Lord is trying to teach His people about what it takes to be qualified to live a Zion life in a Zion city?

There are two main reasons for the Lord to permit and even require us to go through trials. One reason is to allow the wicked to make their choices in fighting against those who have made covenants with God, who are under His protection. He has to permit their behavior so that when it comes time for their punishments, what the Lord unleashes on them is righteous and justified. Doctrine and Covenants 103:1-4 says this:

1 Verily I say unto you, my friends, behold, I will give unto you a revelation and commandment, that you may know how to act in the discharge of your duties concerning the salvation and redemption of your brethren, who have been scattered on the land of Zion;

2 Being driven and smitten by the hands of mine enemies, on whom I will pour out my wrath without measure in mine own time.

3 For I have suffered them thus far, that they might fill up the measure of their iniquities, that their cup might be full;

4 And that those who call themselves after my name might be chastened for a little season with a sore and grievous chastisement, because they did not hearken altogether unto the precepts and commandments which I gave unto them.

One thing that is difficult for us to comprehend is that the Lord is able to quantify or measure every attitude and behavior then balance that with just punishment for those behaviors. He uses a cup as the unit of measure we will all be able to understand. When they have filled up their cup with evil deeds then he will unleash his judgments upon them, but not until they have met a certain level of poor choices.

The second reason for the trials of His people is introduced in verse four above. The saints were not properly being obedient to God’s commandments that they had taken upon themselves by way of covenant. Until they learned to be better people than they were, the trials would continue. But once they began to obey all the commandments they received, the promise in subsequent verses states that they would begin to overcome all their trials from that hour onward.

The lesson uses Zion’s Camp as an example of the trials and sacrifices required of God’s people that act as a proving ground for worthiness. The Lord stated that the purpose of Zion’s Camp was to go and help the saints in Missouri who had been driven from their properties.  His actual words are as follows:  “in preparing the churches to keep the commandments which I have given unto them concerning the restoration and redemption of Zion.” Does He say they are to go and fight battles? No. Does He say they are marching to war? No. He says their purpose is to prepare the churches to keep the commandments.

So where did this misunderstanding come from that this was an army and a military operation? It came from Missouri governor Dunklin. He said he would help the saints get their lands back if they would raise a security force to protect the people. This became the focus of the men who went on the march to Missouri. They just assumed they would have to fight.

The Lord never gives a purely physical (temporal) commandment. All of his commandments are spiritual in nature. His focus was on separating out a group of men who could be trusted with the kingdom. The first trial they passed was to leave their families voluntarily, and march a thousand miles across country to help restore the saints to their lands, not knowing what would be required of them.

All the other trials of Zion’s camp, the bleeding feet, the lack of drinkable water in the blistering heat, the lack of food and the complaining against the prophet for their miseries and suffering were to see where their loyalties lay. When faced with the disappointment of not fighting, but after marching a thousand miles just to turn around and walk home again, caused many to become so angry with Joseph Smith that they left the church. They suffered cholera and the death of their friends, and many other privations during this march.

We often think of trials as being just emotional or spiritual in nature, like having to forgive someone who has wronged us, for example. But often the trials we are faced with are more visceral than that. We lose our job, are betrayed, are forced to give up our worldly possessions without just cause, suffer devastating illness, etc. These are hard things to bear, mainly because we are only looking at these isolated incidents. But when we look at what we learn from these experiences (when we do learn from these experiences) we see they are lessons of submission to God. And that is the biggest lesson of all, learning to submit our will to Him.

This is what is meant to be “tried, even as Abraham.” It is to be faced with losing everything, sometimes even our own lives, or the lives of our loved ones, and still be faithful to the Lord and His requirements. Death does not mean the same thing to God as it does to us. But once we adopt His point of view, that we are eternal beings, so only what happens that affects eternity matters, that is when we are able to bear any hardship in mortality and the Lord can change the hardship into a blessing on our heads for eternity.