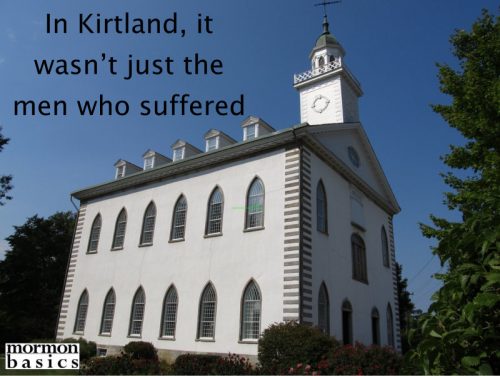 “Mary Ann and the children were terrorized by apostate mobbers, who frequently came to search her property and bombarded her with “threats and vile language,” frightening her to the point of damaging her health. When Mary Ann finally joined Brigham in Far West, Missouri, in the spring of 1838, he was shocked at her condition. “You look as if you were almost in your grave,” he told her.” (labeled for reuse on images.google.com)

It seems that sharing the gospel and adversity go hand in hand. Both sharing the gospel and adversity come with blessings, but both require sacrifice. When the Lord says “Preach my gospel” it isn’t a request. Nor is it optional. We have all made covenants to represent the Lord in whatsoever circumstances we find ourselves, and he is merely expecting us to fulfill our promise.

That may feel like hard doctrine, but when you have read all the resource material for this lesson, if you have any beating heart in your chest, you will feel humbled at what so many of the saints in the early days of the Church sacrificed in order to keep their promises to the Lord. The Kirtland period  was one of both great turmoil and great blessing for the Church and for the individuals who survived that period of the Church’s history.
Many couldn’t handle the demands of their covenants and went into apostasy, while others sacrificed in amazing ways and became the leaders of the Church and were richly blessed with eternal promises. The secret gem of this lesson is whether you can find a way to relate how these people reacted to their circumstances to your own life and determine how you think you will hold up when you suddenly are being asked to do hard and inconvenient things in the name of your religion.

Let’s see if we can bring some of what happened in Kirtland home and relate it to something we can understand. Let’s say you are in a Relief Society meeting or a Priesthood quorum meeting and those present are railing against the leaders of the Church. They don’t like what they have announced and what they stand for. They vehemently oppose the direction they are taking the Church, and would support replacing the current prophet with someone who was more level headed.

What would you do in such a meeting? How would you respond? If you walked in on a meeting like this would you feel like you should slip out the door quietly so as to not attract attention to yourself? Would you just stay quiet and hope no one presses you for an opinion? What would you do if they took a vote of action that would put your membership in question?

These are legitimate concerns. When President Benson gave his talk on how the women of the Church should be at the crossroads when the children come home from school, and that women should not work outside the home unless it was absolutely necessary for survival, what was the reaction in your ward? Do you remember? (Were you alive then?) I was in the Capitol Hill ward in Salt Lake City when that talk was given. I was a young married person with one child and the second one was on the way.

I will admit that I was timid. Never in my life had I heard more vitriol against the leaders of the Church. The brethren in the Elders quorum called the prophet a “dottering old fool” and “out of touch with reality” and many other names. They were filled with anger and were quite savage about their attacks of the prophet.

Admittedly, having never heard anything like it before, I was silent. I was stunned and dumbfounded. I didn’t know what to do. That was many years ago, and I have learned better than to remain silent when members of the Church speak words of apostasy. Here is a quote from the lesson on how Brigham Young reacted when he walked in late to a meeting and the apostates had the upper hand on the conversation in progress. You know the nature of Brigham Young, he didn’t mince words, and he spoke the truth, even if it seemed harsh. It was the truth after all.

“I rose up, and in a plain and forcible manner told them that Joseph was a Prophet, and I knew it, and that they might rail and slander him as much as they pleased; they could not destroy the appointment of the Prophet of God, they could only destroy their own authority, cut the thread that bound them to the Prophet and to God, and sink themselves to hell. Many were highly enraged at my decided opposition to their measures. … This meeting was broken up without the apostates being able to unite on any decided measures of opposition” (“History of Brigham Young,” Deseret News, 10 Feb. 1858, 386).

I ask you again, what would you do? Should we apologize for the prophet? Does the Lord’s authorized servant need to be apologized for? Should we agree with those who oppose the leaders of the Church, even if it is just by appearances (to keep the peace, of course), even though we don’t really agree with them?

This is the day of the beginnings of the persecution of the Lord’s anointed, and by extension, His people. The wicked will increasingly feel like they cannot rest until they make the saints proclaim themselves either for the Lord or with them (the wicked). In my opinion, the day of decision is quickly drawing closer. This is the beginning of our Kirtland period. We have had rich blessings from the Lord, just like the early saints who got their first Temple and the ordinances Temples bring. But along with those blessings came Satan’s opposition and those he was able to enlist to do his bidding.

What do you think the perspective was of those members who made great sacrifices to spread the gospel in the Kirtland period of the Church? Was the men’s perspective any different than their wives they left behind? Here is a link to an article I wish everyone would read. I found it to be profound in its implications. This relates the story of Brigham Young’s wife and the sacrifices she was willing to make in order for her husband to go on his missions for the Church. It really made me stop and think about my own level of commitment. Could I ever suffer like she did and still bless the Lord for the opportunity to serve Him?

“Take Special Care of Your Family”

I recognize that this study article is vastly different from what I normally write, but I was profoundly moved by some of the readings that go with this lesson. What the saints in Kirtland were willing to do for their membership in the Lord’s Church is almost without parallel. If suffering and sacrificing brings forth the blessings of heaven then that explains why the Church prospered despite the persecutions.

Yes, there were those who left the Church and persecuted those who remained, but most of the members remained faithful, relying on the strength of their testimonies to see them through the hard times. When you read about what these good people were willing to do and to live with, and live without, in order to keep their membership in this Church, it makes me wonder if in my life of relative ease, I could make the same choices and be as strong as they were.