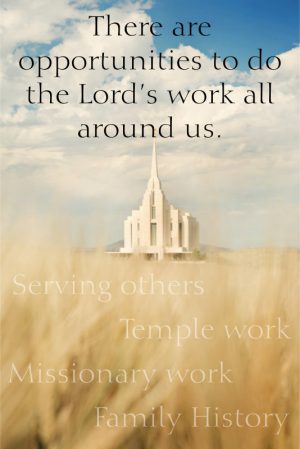 In the sections of the Doctrine and Covenants used for this lesson the Lord states repeatedly that the field (the world) is ripe and ready to harvest. In one of the sections he uses the phrase “already to be burned” (D&C 31:4). If you recall in Jacob 5 in the Book of Mormon the Lord of the vineyard worked tirelessly for a long time to salvage all the fruit he could from the trees he had planted. But when he was finally running out of time, it was then that he had his servant go and call other servants to help with the work. Here is Jacob 5:70-72.

70 And it came to pass that the Lord of the vineyard sent his servant; and the servant went and did as the Lord had commanded him, and brought other servants; and they were few.

71 And the Lord of the vineyard said unto them: Go to, and labor in the vineyard, with your might. For behold, this is the last time that I shall nourish my vineyard; for the end is nigh at hand, and the season speedily cometh; and if ye labor with your might with me ye shall have joy in the fruit which I shall lay up unto myself against the time which will soon come.

So why am I referencing these verses from the Book of Mormon? It is because this is the day and time to which those verses are referring. We are those other servants the Savior has called to help bring in the harvest before the day of destruction. We are few in number when compared with the task at hand. We have to reach some eight billion people, and we are a church of only some 15+ million. No wonder the Lord says it will take all our might, mind, and strength.

It is true that apostles are traveling ministers whose work is to testify of Christ in all the world. Many of those to whom the revelations used in this lesson are about became apostles. But the call for every member of the church to assist the Lord in his work in the Father’s vineyard has been made abundantly clear by the modern prophets. Do phrases like “Lengthen your stride” and “Every member a missionary” sound familiar?
The call to participate in the final gathering of the Lord’s elect has been extended to anyone and everyone who is willing to make covenants with the Lord in these last days before the Savior’s return. The Lord calls us to be missionaries just like we are told to “prepare every needful thing” and to not run faster than we have strength, etc. We are told that before we think of opening our mouths to share the Lord’s gospel we need to fill our minds and hearts with his truths. Then, when we need to speak by the Spirit, and we have lived worthy of His Spirit, he will fill our mouths with his words to the convincing of both Jew and gentile.

Have you ever wondered why angels are so bold in their declarations? They appear to have no fear of anyone or anything. Why is that? Do you think it might have something to do with their knowledge of who sent them, and the power and influence he possesses? If you and I were so filled with the knowledge of God, so full of an awareness of whose errand we were on, do you think we would be less timid in our commitment to open our mouths and speak to others?
The scriptures also teach us that perfect love (charity) casteth out all fear. We become fearless, not because we are brave, but because we no longer worry about how someone will react to the message of the restored gospel. Our hearts are too filled with love for that person to worry about how we might look or whether or not we know the perfect thing to say or do at the moment. The only thing that matters is that we share the blessings of God’s love with our brother or sister. That love is manifested in the covenants we have been given that will help us to come to Christ and be exalted as families.

Let’s review our baptismal covenant and see just how difficult it is (I jest, of course). It is found in Mosiah 18:8-10.

8 And it came to pass that he said unto them: Behold, here are the waters of Mormon (for thus were they called) and now, as ye are desirous to come into the fold of God, and to be called his people, and are willing to bear one another’s burdens, that they may be light;

10 Now I say unto you, if this be the desire of your hearts, what have you against being baptized in the name of the Lord, as a witness before him that ye have entered into a covenant with him, that ye will serve him and keep his commandments, that he may pour out his Spirit more abundantly upon you?

Think about these requirements. How difficult is it, really, to reach out to someone and help to ease their burdens? How much of a sacrifice is it to mourn with someone in mourning? When was the last time you were able to reach out to someone and lend a helping hand when someone needed comfort or support during hard times in their life? This is what it means to serve and represent the Lord in our daily lives.

The Lord is not asking us or expecting us to stand in front of large assemblies of hostile people and declare his gospel. He does expect us to demonstrate his love and concern for all of our Father’s children however.  When we reach out beyond our personal space or beyond our family bounds and serve others, the Lord can take that service and magnify its consequences a thousand fold.
Take Samuel Smith, Joseph Smith’s brother, for example. He set out on his mission and talked to whomever he could. He was mistreated by many, and only left two copies of the Book of Mormon with people. He returned home thinking he had not done so well on his short mission. But the Lord knew all that was needed was a willing soul to get those Books of Mormon into the right hands and He could do the rest. The two people Samuel left the Book of Mormon with happened to be the brother and sister of Brigham Young, who later became the second president of the Church.
The Lord has not commanded us to be brilliantly successful. He has only said to do all we can with what we have, and that is enough. Samuel did what he could, and by earthly standards he could have been judged a failure. But he did all that was asked of him with an eye single to the glory of God, and God did the rest. When we give the Lord our all, the day will come that He will vindicate us and show us how he was able to use our small part to accomplish great things in the lives of others. All we need to do is be willing to put our trust in God and do our best. It will be good enough.
Kelly Merrill2018-08-07T21:51:28-06:00Doctrine & Information, Free Lessons & Materials, Ministering|0 Comments