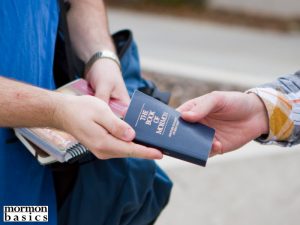 We have no record that there is any book on earth that has had as much effort put into creating it for a specific generation of time than is the Book of Mormon. We have record of the Lord making plans for the book more than 2,500 years ago. And He was actually working on it with the Jaredites a thousand years before that. With so much forethought and effort put into creating the book, you can imagine why the Lord is so particular that we give it the respect and treat it with the dignity it deserves. This book was made specifically for those of us in the last dispensation.

Purpose behind this lesson: To help class members recognize the Lord’s hand in the coming forth of the Book of Mormon and to encourage them to study the Book of Mormon, follow its teachings, and share it with others.

That is a lot of material for one lesson. That should keep you busy for a while.

Evidences of the Lord’s hand

In 1 Nephi 9:2-6 Nephi tells us that his father wrote a whole narrative about their travels and the events that transpired as they went through the wilderness and traveled to the promised land. But he says that he also had been commanded by the Lord to write an account of his own ministry during this same period of time. He says in verse five that he doesn’t know why the Lord wanted him to make this particular record, but he concludes in the sixth verse by saying that since the Lord knows all things from the beginning, he prepares “a way to accomplish all his works.”

3 Nevertheless, I have received a commandment of the Lord that I should make these plates, for the special purpose that there should be an account engraven of the ministry of my people.

5 Wherefore, the Lord hath commanded me to make these plates for a wise purpose in him, which purpose I know not.

6 But the Lord knoweth all things from the beginning; wherefore, he prepareth a way to accomplish all his works among the children of men; for behold, he hath all power unto the fulfilling of all his words. And thus it is. Amen.

So Nephi had no idea what the Lord was going to do with his record that was, as far as he was concerned, a duplicate, more or less, of what he had written in his other records, and of what his father had also written. What made this account different from the others was that it was a record of his spiritual dealings, not just a historical account.

When Joseph gave the 116 pages of the record of Lehi to Martin Harris, who lost them, the Lord told them that evil men had already altered the text so as to trap Joseph in a lie that he didn’t have the gift of translation if he were to retranslate the same pages (D&C 10:10–19, 29–33). This is why he had told Nephi to prepare another account of the same time period as his father’s account. He was planning on using this more important account to foil the plot of these evil men to destroy the work of translation of the Book of Mormon. That was more than 2400 years before Joseph Smith was born.

The Lord promised multiple prophets throughout the Book of Mormon’s record that their prayers for their records to be made available to their descendents would be honored. Note that the Lord was paving the way for the book of Mormon during Nephi’s lifetime, hundreds of years before these other prophets and His disciples even thought to ask that their records would be made available to their posterity in the latter days. Here are the main verses in Doctrine and Covenants 10:46-52.

46 And, behold, all the remainder of this work does contain all those parts of my gospel which my holy prophets, yea, and also my disciples, desired in their prayers should come forth unto this people.

47 And I said unto them, that it should be granted unto them according to their faith in their prayers;

48 Yea, and this was their faith—that my gospel, which I gave unto them that they might preach in their days, might come unto their brethren the Lamanites, and also all that had become Lamanites because of their dissensions.

49 Now, this is not all—their faith in their prayers was that this gospel should be made known also, if it were possible that other nations should possess this land;

50 And thus they did leave a blessing upon this land in their prayers, that whosoever should believe in this gospel in this land might have eternal life;

51 Yea, that it might be free unto all of whatsoever nation, kindred, tongue, or people they may be.

52 And now, behold, according to their faith in their prayers will I bring this part of my gospel to the knowledge of my people. Behold, I do not bring it to destroy that which they have received, but to build it up.

Note that according to these verses, these prophets and disciples were not just praying for their own posterity, but for us! They wanted to leave the blessing of Christ’s teachings on all who would ever come to the Americas. They specifically prayed that we could have these teachings so we could also have eternal life. The Lord promised them that he would preserve their record so He could add it to the record we would receive from the Jews in the form of the Bible. This way we would have a double witness of Christ’s divinity and his work. This is why the name of the Book of Mormon was changed and the phrase added, “Another Testament of Jesus Christ.”

True to his own law, the Lord prepared additional witnesses to testify of the coming forth of the Book of Mormon as a divinely inspired work. He called three special witnesses then another eight witnesses besides. He also prepared the way by sending Joseph Smith people who gave them what they needed in order to continue the work of translation. Martin Harris provided Joseph with food which they had run out of so they could continue to work on the translation. Martin Harris also mortgaged his own farm in order to finance the printing of the Book of Mormon.

The more you look at the circumstances surrounding the coming forth of the Book of Mormon, the more you will see the Lord’s guiding hand in everything having to do with it.

In the very early days of the Church, as early as 1832 the Lord condemned the Church for taking the Book of Mormon lightly, and not using it as it was intended to be used. He told the Prophet Joseph that the whole Church would be cursed if they didn’t repent and use the Book of Mormon more. In modern days President Ezra Taft Benson also warned us about this very curse.

“The Lord is not pleased with us in the manner of attention we’re giving the Book of Mormon, a new witness for Christ. We need it in our homes, we need it in our families. It was written for us today” (Church News, 9 Nov. 1986, 10).

If you read the verses around where the Lord puts the church under a curse, you will read that the members of the church are under the imperative to take the message of the Book of Mormon to the whole world. And if they cannot go personally, they are to send their testimonies of the Book of Mormon to every nation, kindred, tongue, and people. Small wonder the Brethren have encouraged us to put our testimonies out on the Internet and given us so many opportunities to reach out to help and succor people from every land!

“There is a power in the book which will begin to flow into your lives the moment you begin a serious study of the book. You will find greater power to resist temptation. You will find the power to avoid deception. You will find the power to stay on the strait and narrow path. The scriptures are called ‘the words of life’ (D&C 84:85), and nowhere is that more true than it is of the Book of Mormon. When you begin to hunger and thirst after those words, you will find life in greater and greater abundance. … [You will also enjoy] increased love and harmony in the home, greater respect between parent and child, [and] increased spirituality and righteousness.”

“These promises,” President Benson assured, “are not idle promises, but exactly what the Prophet Joseph Smith meant when he said the Book of Mormon will help us draw nearer to God” (in Conference Report, Oct. 1986, 6; or Ensign, Nov. 1986, 7).

Is it any wonder that in our study of the opening of this last dispensation we would have a lesson on the very book we just spent a year reading? The Book of Mormon was written for us. It was meant for those living in the last days before the Savior’s return. As we study the unfolding of the restoration of the Lord’s church, remember that one of the most important parts of the restoration is the coming forth of this most important book of scripture, the Book of Mormon.