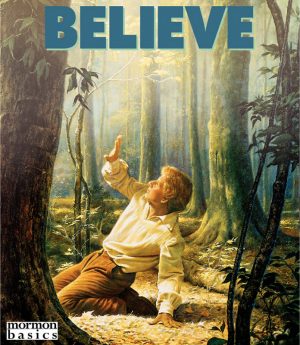 The Great Apostasy was, in many ways, a natural event that couldn’t be helped. The reason is this – once the apostles were no longer available with their priesthood power and the gift of the Holy Ghost, people were left to their own interpretations of the doctrines they were being taught. The journey from one congregation to another often took many days or weeks. Communication was had only by letter or word of mouth. This made regulating the affairs of the Church difficult at best. Apostasy naturally happens without the gift of the Holy Ghost.

How does apostasy happen?

Here is an example from my current ward. Our sacrament table has a microphone built into the table to help the priests be heard in the back of the chapel. Unfortunately, the sacrament table cloth hangs down in front of the mic, so to help the priest reading the prayer the priests on either side of him hold up the cloth to get it out of the way. The visual effect from the congregation’s point of view is that they are trying to shield or hide the priest giving the prayer from being seen by the congregation, because they hold the cloth up high enough that they hide the priest giving the prayer. The members have no idea why they are doing this.

Remember that most of these converts outside of the Jerusalem area were not Jews, but pagans who had worshiped wide variety of false gods, including gods of rock and wood. They brought with them all manner of false assumptions and misunderstandings that took time and practice in the gospel to dispel and correct. The same problem existed in the restored Church. All of the converts, though mostly Christians from other faiths, still had many misunderstandings and assumptions about the doctrines they were hearing for the first time in the restored gospel. They just didn’t have the doctrinal background yet to process this knowledge in a spiritually mature way.

Have you ever wondered why Joseph Smith made the following statement in Joseph Smith–History 1:6? Referring to the ministers and converts of the various churches he says that after the people were mostly converted to a church, “all their good feelings one for another … were entirely lost in a strife of words and a contest about opinions.” Opinions? Why does he call their beliefs opinions?

The reason they were all arguing over which church was right is because they had lost much of the truth in the Great Apostasy. All they had left was personal opinion as to what was right and what was wrong. That is the reason there were so many churches at the time (and indeed, currently). In 1829 there was no Church with the gift of the Holy Ghost and revelation that could answer people’s questions about the doctrines of salvation. People were left to argue it out among themselves.

As you read the account of Joseph’s first vision, notice that he never once said that he saw God the Father and his Son, Jesus Christ. He only said he saw two personages, and that one of them “said, pointing to the other—This is My Beloved Son. Hear Him!” Put yourself in the place of the ministers of his time. If someone told you that story, who else could he be referring to but God himself? They were offended by such effrontery, such impudence! How dare he assert that after almost 2,000 years of silence, this backwater boy is claiming that God appeared to him and told him that the church you earned your living promoting had only a “form of godliness.” How insulting!

The ministers were so sure of their beliefs that they couldn’t even conceive that Joseph’s claims backed up their very reason for their church having split from the mother church in the first place. They couldn’t see the forest for the trees, as it were. That this doesn’t even begin to address the issue of their personal pride of having their living and reputation accosted by this rival “truth.” Afterall they spent their lives defending their faith.

Here are just some of the truths Joseph learned through his first vision. Your class may provide you with additional truths they have noticed.

As you study the passage of the first vision you will probably think of other things Joseph’s narrative reveals or hints at. He didn’t come out and specify much in a direct manner. Much of the nine items mentioned here are derived from reading between the lines. Can you see why the ministers of the day would become so upset about his vision? It disrupts almost 2000 year’s worth of tradition and belief.

The Lord did not just decide one day to show up and restore the gospel. Remember that he has always known the entire history of the planet and its people, even before the world was created. He knew it would take centuries to prepare a place where the gospel could be restored for the last time before his son’s second coming. For centuries before Joseph Smith was born the Lord was working on the political climate, the social conditions, the scientific community, and on every other facet of the human condition to make the world ready for the day He and Christ would visit Joseph Smith and open the last dispensation of time.

The Lord knows everything in advance, so there are never surprises. He works through little changes here and there over the course of generations and millennia to bring about his grand purposes. America is the chosen land, the western hemisphere, the land of promise. This place was safeguarded for thousands of years so it would be ready for this very event. At the time Joseph was oblivious to all of this. He only knew he had a problem and the scriptures told him to take that problem to the Lord. He obeyed, and what followed became a history that changed the future of nations.

On that day, in that grove of trees, God called the boy Joseph to be the prophet to open the last dispensation of time. This is the greatest dispensation of the world, even greater than that of Father Adam, for this dispensation brings all the blessings of all previous dispensations into one great work for the salvation of all of God’s children. And Joseph Smith became His mouthpiece to the whole human family.