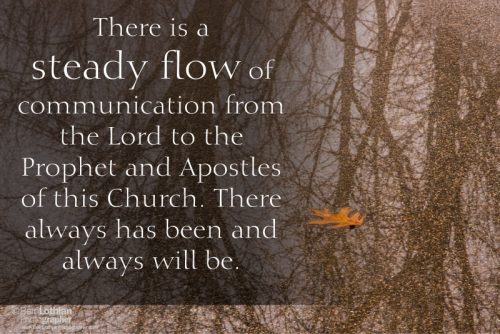 If you worthily have the gift of the Holy Ghost, you are worthy of having revelation. This Church cannot run without revelation. It is the lifeblood of all we do. This lesson focuses on the need for continuing revelation in order for the Church to move forward, particularly the revelations received at the highest levels of the Church.

How often do the Brethren have revelation?

Every Thursday, like clockwork, the Brethren of the Twelve Apostles and the First Presidency meet in an upper room of the Salt Lake Temple to coordinate the work of the Lord’s Church. President Harold B. Lee relates this story about their Thursday meetings:

“Elder John A. Widtsoe of the Council of the Twelve once told of a discussion he had with a group of stake officers. In the course of the discussion someone said to him, ‘Brother Widtsoe, how long has it been since the Church received a revelation?’ Brother Widtsoe rubbed his chin thoughtfully and said in reply, ‘Oh, probably since last Thursday’” (Stand Ye in Holy Places [1974], 132–33).

I don’t think Elder Widtsoe was being facetious in his response to the question. Unless your definition of revelation is the earth-moving, “Thus saith the Lord” kind of revelation, you might be surprised at the number of revelations the Brethren receive as they fill their responsibilities as special witnesses of Christ.

Think about your daily activities. How often in the course of performing your Church calling have you had a thought pop into your head that turned out later to be fortuitous or advantageous for someone you were serving? How often do you need to make decisions and you take it to the Lord and walk away with peace in your heart about the choices you made? Any and all communication from the Spirit is revelation. Every baptized member has this gift and it is what we use to guide our lives. If we, normal as we are have the right to be led by the Spirit, how often do you think the leaders of the Church have His inspired counsel whispered in their ears as they seek to guide the Lord’s kingdom in a manner pleasing to God?

The nature of revelation

The Lord has made it clear that He expects us to be anxiously engaged in well doing. We need to be making decisions all on our own to participate in doing the Lord’s work during our time in mortality. He doesn’t speak well about those who have to be commanded in all things. The Lord refers to them as wicked and slothful servants.
Does that mean that every time we try to do something good the Spirit is going to direct our paths and tell us what we are supposed to do next? Sorry, the Lord doesn’t believe in micro managing His children. He wants us to learn and grow from our decisions. Sometimes He withholds answers so we have to stretch ourselves to receive the answer we need. Everything to the Lord is about our growth and ultimate happiness. That means He is also willing to let us stumble and fall sometimes if we can learn valuable lessons in the process.
The Church is the vehicle through which all of His children will be blessed in the latter days. Does that mean the Lord won’t let the Brethren make a mistake? Sometimes they have to make decisions that are based on incomplete information. Remember that the Church structure is constantly changing to meet the needs of the growing Saints, both in our numbers and our own spiritual development.
Look at the changes that took place in the early years of the Church. When, for example, Joseph smith first preached the principle of baptisms for the dead, one of the first baptisms to be done was a mother who got baptized for her deceased son. That would never happen today. Does that invalidate what she did? No, because they didn’t know any better. The principle was new and it took a while before the saints were ready for further instructions.
One of those further instructions was being told that they could no longer do the baptisms for the dead in the river. The Lord wanted that sacred ordinance reserved for His Temple. That meant the saints had to hurry to get the temple completed so they could continue the practice of baptisms for the dead.
Another example was in the practice of “adopting” oneself to a general authority of the Church. People used to seal themselves to those in the highest councils of the Church instead of to those of their own bloodline. It took a revelation from the Lord to correct this practice, and that was well after Brigham Young’s time.
So when the Brethren teach us something we can’t always assume it is the final and ultimate word of the Lord. We aren’t always ready for the final version of a doctrine. Often times we need to grow into a doctrine before we are ready for a more advanced version of the doctrine or practice. But each stage along the way is received by way of revelation, and each stage is correct for God’s people at that time it was received.

Many people accused the Brethren of “caving” to current demands of social justice when the 1978 revelation on the Priesthood was issued. They felt that the Church was finally giving in to the social pressures to do what everyone else was already doing by giving the priesthood to all worthy male members of the Church. But this isn’t the whole picture. The prophets had been praying for an answer as to why the men of African black ancestry were not permitted to hold the priesthood since the late 1800’s. The practice was implemented by Brigham Young, but without any explanation or stated revelation given. We simply don’t know why he made the choice to restrict their access to the priesthood, especially when Joseph Smith allowed it.
This lack of understanding gave way to wild speculations and a multitude of theories that only gave birth to more of the same over the decades. President Kimball wasn’t the first prophet to plead with the Lord in the hopes of a revelation to grant Priesthood access to all men everywhere. There is a lot of documentation available to show that this was an ongoing concern for the Brethren for decades before the revelation was finally received.
This may explain why people often feel that if they protest for something long enough the Brethren will suddenly “have a revelation” and grant what they want. The women’s movement is one such group. They figure that if they can convince the leaders of the Church that their way of thinking is correct that the prophet will find a way to give them what they seek, which is priesthood for women.
The problem with this is that these people don’t understand the nature of God’s dealing with His people. None of us can decide that life ought to be a certain way and expect the Lord to just agree with us because we don’t like the way He currently has things set up. And anyone who protests in an effort to push the leaders of the church to cave to their demands certainly don’t understand that revelation doesn’t work that way.

Our children sometimes accuse us of not caring about them because we don’t make choices they like. They sometimes think they ought to be able to stay out late at night and hang out with friends we don’t approve of. They think that if they want it we should be willing to give it to them. They just are not aware of such things as the family budget, the need to pick one’s friends more wisely, and the dangers of being out too late at night.
In the Church we also don’t see all the circumstances behind the decisions of the leaders of the Church. We are not aware of all the committees who are researching questions the leaders need to find answers to. We don’t see all the meetings, the written reports, and interviews with people who know about such things. All we see is a little blurb online that says that an announcement was made from Salt Lake today about such and such.

Where is this going?

Just as children need to learn to have faith in their parents and the efforts their parents put into doing what is right on their behalf, so too do we need to learn to have faith in the Prophet and Apostles of the Lord’s Church that they are doing everything in their power to stay close to God so they make wise choices that will benefit the members of God’s Church for generations to come.
It is this kind of forward thinking efforts by the Brethren that gave us the Proclamation on the Family in 1995. It is the same kind of thinking and efforts that gave us the recent proclamation about children of same sex relationships not being able to be baptized until the age of 18. And now we have a standard set of worthiness questions for all prospective missionaries.
All of these kinds of decisions by the Brethren are inspired, well thought out, and fully discussed and prayed about before being ratified in a Thursday meeting. So to answer the question, “Is there revelation guiding the Church today?” the answer is, you bet there is!
Kelly Merrill2017-12-08T11:34:04-07:00Doctrine & Information, Free Lessons & Materials|0 Comments