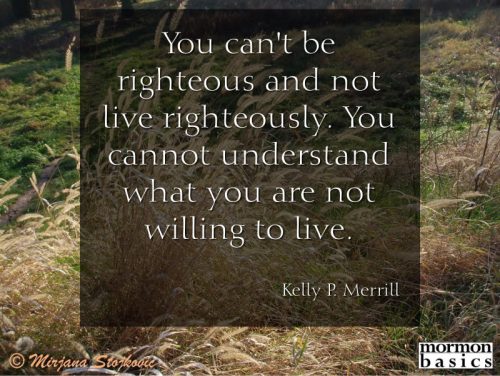 This lesson is a study in different aspects of the Atonement of Christ. God shall redeem his people, but only if they come to understand the scope and intimate greatness of the sacrifice their God made in their behalf.

The purpose of the Law

The purpose of the Law of Moses was to remind the people with physical observances and habits of the spiritual salvation that would be made available to them when their Savior came to perform the Atonement. Every part of the Law was to remind them of something having to do with Christ.

One example is the scapegoat. Each year all the sins of the people were ritualistically placed on the head of a goat, which was then driven out of the camp of Israel into the desert to be devoured by wild beasts. This transference of sins from the people onto the goat was to teach them that when their Messiah came He would take upon himself the sins of all the people and enable them to become cleansed from their personal sins. He would bear the weight and consequences of their misbehavior.

Every part of the law Moses gave the people, when properly understood, demonstrates an aspect of the sacrifice of Christ as the lamb of God. As they were to sacrifice during Passover a first-born male lamb, without any flaw or blemish, so our Father sent us a lamb, an innocent soul, to be sacrificed in our behalf. He was without flaw or blemish. Even the way in which the lamb was to be killed was to imitate how the Savior would die. There was to be a spilling of blood, but no broken bones, for example.

Christ as Father and Son

The great definition as to how Jesus is both the Father and the Son is found in Mosiah chapter 15. Let’s step back into the premortal life and look at the relationship we all had with our Father in Heaven. We were all His children. In the grand council when our Father presented the great plan of happiness that would take us through the perils of mortality and land our souls by His side for the rest of eternity, Lucifer presented a counter proposal that had the stipulation that the Father give all the glory to Lucifer for saving us.

Of course our Father would not just give all his glory to Lucifer when Lucifer’s plan would exalt only himself and not allow any of us to achieve what our Father had personally achieved. So Lucifer’s plan was rejected. Jesus was chosen to be our Savior, and those who followed Lucifer’s rebellion were cast out.

Here is the interesting part of what happened next. In order for Jesus to be our Savior and to perform the Atonement, our Father in Heaven literally turned over the responsibility of all his children to his first born son. The glory for achieving the salvation of all the members of the family was to be given to this one son, who in turn gives it all back to the Father. The Father cannot glorify himself, just as the son cannot glorify himself. They glorify each other. Glory has to be given, not taken.

Jesus performed all the work of a father when He created the universe (under our Father’s direction). To be a father is to organize and to create. That is part of the definition of the word father. When we turn to Christ for direction, that is, when we learn from Him what we need to do to be saved, we are taking instructions from him like we would as a child takes direction from a father. As we make covenants with our Father in Heaven at baptism and in the temple, our Father in Heaven gives our souls to Christ. We do good and the good glorifies God, who gives the glory to Christ. We become His spiritual posterity, His “seed,” or children, because we are learning how to become like our Father in Heaven by imitating Christ, just as a child imitates the actions of a father.

When all is said and done, and all the work of salvation has been done for every living soul to ever come to earth, the Savior will turn it all over to the Father to glorify Him, who in turn will give it back to Christ to glorify Him. Christ has promised to then turn around and give that glory to all those who have followed Him and kept the commandments in mortality. This will be the beginning of our glory as resurrected beings. We will share Christ’s glory he receives from our Father. This is what it means to become a savior on Mt. Zion. We participate in our own small way in the salvation of our brothers and sisters. We imitate the righteous behavior of our spiritual father, Christ.

Jesus is also the son in that he has always, and will always, subject His will to the will of his Father. It was the Father’s will that Christ perform the Atonement for us, but Jesus was completely willing to do it for us because of his great love for our Father and for us. Jesus lived his mortal life subjecting his every thought and action to the will of Him who sent Him. He teaches us to subject ourselves to the will of our Father in Heaven also.

Jesus has us pray to our Father in Heaven. It is our Father who answers our prayers, but only because His only begotten son in the flesh pleads for us, which He can do because He personally paid the eternal price for our sins. This is why we pray in the name of Jesus Christ. We are not worthy of our Father’s blessings, but Jesus is. When we pray in His name to our Father, Jesus asks the Father to grant our prayers, and because of his personal worthiness before our Father, our prayers are granted.

Abinadi is the father of Christ’s Church

Up until the time of Abinadi’s death, the Nephites lived the law of Moses like the Jews had lived it for millennia. All of their focus was on living the observances of the law Moses gave them. After Abinadi’s preaching converted Alma, one of the priest’s of the wicked king Noah, Alma set up the people in congregations, like the Church of Christ would be run after Jesus’s resurrection. They were actually living like the Christians in 50 A.D. while still living the Law of Moses in 100 B.C. To those who were converted because of Abinadi’s teaching, the Law of Moses was observed because it was a commandment, but the law was dead to them. They were living as though Christ had already come and performed the Atonement. All they preached in their church was repentance, baptism, and the gift of the Holy Ghost.

To have the 10 commandments written on tablets of stone is one thing, but to have their teachings engraven or inscribed on the fleshy tablets of our hearts is another. Once we have internalized the basic laws of the Lord and made them the compass by which we steer our course through mortality, we become very different people.

This was the point Abinadi was trying to get across to the wicked priests of Noah. You can’t be righteous and not live righteously. You cannot understand what you are not willing to live. The commandments cannot just be taught. They must be taught to be lived. Only in keeping the commandments does the salvation of the Atonement become possible in our lives.

Abinadi gave his life, allowing them to burn him alive, in order to demonstrate to them that the gospel of Christ must become an intimate part of our lives. We must be willing to both live and die for it in order to partake of its blessings.

When Abinadi told them that ‘God shall redeem His people,’ he was telling the priests and Noah that Jesus would do His part to enable each of us to repent and be forgiven of our sins. Jesus would live his life in mortality in perfect obedience to our Father in Heaven, and the commandments he gives us help us become like Him. Now it is up to us to become converted to the life we need to live in order to receive the blessings of that sacrifice.