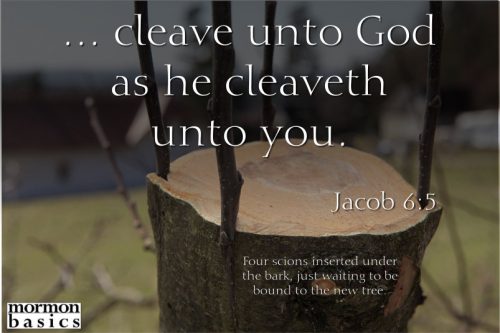 I am writing this lesson help specifically for those who are not familiar with what grafting is and how it works. This allegory, or story that teaches a lesson, is much easier to understand once you comprehend what happens when you make a graft.

The olive tree and its fruit have been the focus of attention for the Lord’s people from the time of Noah down to the present day. When Noah was drifting on the waters after the flood, he sent out a dove to see if there was any dry land. The dove returned to Noah with a piece of an olive branch in its beak. The olive branch has been the symbol of peace and hope ever since. The fruit is used for food, but just as importantly as a source of oil. Olive oil burns with a clean white light, and in the gospel context has always represented the Spirit of God and revelation.

You will find that olive oil figures prominently in Hebrew culture being used as the source of oil required in the lamps of the ancient temples. There are stories of miracles surrounding the use of olive oil, and olive trees were the trees being grown in the garden of Gethsemane. The nature and properties of the olive tree are deeply representative of the Lord’s people and his relationship with them.

As long as an olive tree is properly pruned and fertilized, it can be grown for thousands of years. When the top of the tree grows old and starts to die the roots send up seedlings that can be grown elsewhere or even be used as grafts into the main tree to give it new life.

If you have an olive tree that has a quality or characteristic you like, but it has weak rootstock, you can take a young stick, called a scion, from that tree and graft it into the rootstock of a much stronger olive tree, giving you the best of both varieties in the same tree.

The graft is usually a tip of a branch that has grown within the last year. It is cut off the tree about a foot from the tip of the branch. The base of the cutting is stripped of its bark til it becomes a thin slip of wood. An incision is cut into the olive tree branch that is receiving the graft just under the bark, and the thin slip is inserted into that cut. The incision is then bound up and wrapped to seal it from air, water, and light. In the dark the main tree tries to heal the wound it just received by the cutting of its bark. That healing process generally accepts the new scion as part of itself, feeding it as it would its own natural branches. Eventually, the new branch blossoms and bears fruit just like the natural branches do. The only difference is that this branch carries with it the characteristics of the tree it came from.

Here is a video that is less than 2 minutes that demonstrates how grafting an olive branch is done. (https://youtu.be/Fdlw53GRBjA) Notice that the scion is completely wrapped for its own protection as it is fed for the first time by its new mother tree. This is what should be happening when we accept new converts. There is a period of time when the new start is very tender and susceptible to being destroyed, so it is handled with care until it shows signs of producing leaves on its own.

Symbols in the allegory

The master of this vineyard (and vineyards can be grapes or olives) is Christ. The main olive tree mentioned at the beginning of Jacob 5 represents his covenant people, Israel. The roots of our relationship with Christ are found in his teachings. We receive our spiritual nourishment from his teachings through our prophets, the scriptures, and the Holy Ghost. These represent the trunk and roots of the tree. Just as a tree has many branches, so Israel had twelve sons who produced twelve nations.

The Lord has always wanted us to produce good fruit, meaning good or righteous works. When we obey the commandments our lives are filled with good works, which in turn results in our souls being saved in His kingdom in the final judgment. In the allegory he keeps talking about how he wants to “lay up fruit unto the season thereof.” The season being referred to is the final judgment. The more souls he can save, the better the “harvest” for him. So the fruit can be either good works or our souls. Both work to answer the description of the fruit.

We have always been told that those who rebel and are disobedient will be burned at his second coming. This is represented in the allegory as branches of the tree that wither and die or that no longer bear good fruit, but instead bear wild fruit. Wild fruit are works that do not lead us to salvation, but to damnation.

The scattering of Israel

For many centuries Israel was told that when the day came that they rejected their God that He would scatter them throughout the whole earth. The Book of Mormon begins after the 10 tribes had already been taken by the Assyrians and carried off into the north countries. Lehi was led away from Jerusalem because the Babylonians were about to come and carry away the remaining Jews. In first and second Nephi we read about prophecies that tell of the eventual destruction of the Nephites and the eventual scattering and smiting of the Lamanites by the gentile nations that would come to possess the American continent.

How the people behave after their change of location is demonstrated by whether they produce good or wild fruit. If they are obedient to the commandments their fruit is good. But those who are disobedient and produce wild fruit, or behavior that leads to damnation are cut off and destroyed.

The gathering of Israel

Towards the end of the allegory the Lord sees that his original tree is dying once again because its branches are producing only wild fruit, so he decides to reverse the process and he brings in servants to start the process of gathering the branches he scattered throughout the vineyard back into the original tree. This is what the Restoration of the gospel is all about. We are the servants God has called to help him find his scattered children around the earth and bring them back into the mother tree, the gospel of Christ.

When the gathering is finally complete, and all that can be grafted back into the natural tree have been returned, then all those branches that have withered or are only bearing evil fruit will be cut down and burned. This is what will happen at the Savior’s second coming.

The beauty of grafting

As you read Jacob 5, notice that the Lord of the vineyard doesn’t care if the fruit comes from a natural branch (one who is of the physical blood of Israel) or if the good fruit (good behavior) comes from a branch that came from a wild olive tree (from a gentile). All he cares about is whether the graft into the root stock took. If we take our nourishment from the teachings of the prophets, and from His living word through the scriptures, ANYONE can produce behavior that is acceptable to God through the making of covenants in the waters of baptism and in the temples. His blessings are freely given to anyone who is willing to covenant with Him and live according to those covenants.

As a graft from any source is fed by the tree, just like it feeds its own natural branches, so the natural tree benefits from the graft because the graft brings with it its own strengths and properties that the natural fruit may not have. Both are benefited.

If a tree has too much root and not enough branches, it can overcome the branches causing them to produce wild fruit. If the branches take too much nourishment to themselves they outgrow the root system and become good for nothing. Think of a tree that has been pruned and has grown many, many “suckers” that produce a ton of woody branches, but no usable fruit. In the allegory one of the main problems the trees faced is that the branches, the children of Israel, became proud, high minded, arrogant. “Suckers” if you will. They were lifted up by their own vain imaginations and became good for nothing but to be cut out. Their “loftiness” caused them to strip the nourishment from the tree and they became worthless to the Lord, and were only good for being cut off and thrown into the fire. This is a warning for us not to let pride and arrogance, intellectualism, and a spirit of criticism enter into our hearts.

When we are grafted into the natural tree we repent and come into the Church of God. If we harden our hearts and refuse the nourishment of the gospel of Christ then we are doomed to die, for we will wither spiritually. In Jacob 6:5-6 he words it this way:

5 Wherefore, my beloved brethren, I beseech of you in words of soberness that ye would repent, and come with full purpose of heart, and cleave unto God as he cleaveth unto you. And while his arm of mercy is extended towards you in the light of the day, harden not your hearts.

6 Yea, today, if ye will hear his voice, harden not your hearts; for why will ye die?

A successful graft is a person who repents and is baptized and fed by the pleasing word of God and produces good works. The graft that doesn’t take or the graft that took long ago, but has now rejected its source of nourishment is the person who no longer is willing to be led by Christ and his servants. The only way we can live with God again is to “cleave unto God as he cleaveth unto you.” That is the perfect description of a graft.