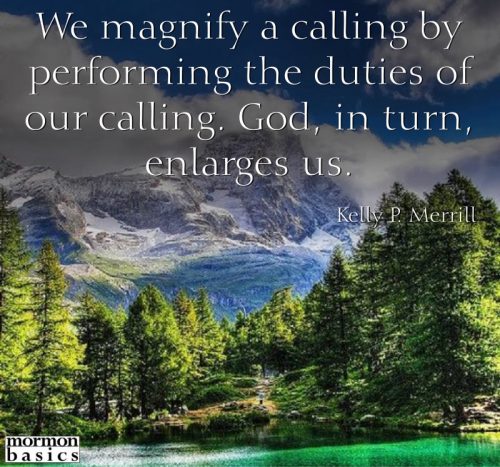 In this lesson we will look at three main topics, magnifying our callings, riches and chastity, and the importance of not looking beyond the mark. Because of space limitations each topic will only be a brief review, but it should help you as you read this week’s reading assignment to apply these principles to your own life. These are all parts of how we seek for the kingdom of God.

Sometimes we forget that we cannot make greater that which the Lord has given us. He makes it greater. It is like a talent or ability. Let’s say you have the gift of a listening ear. God has given that ability. You did not pick it up at the grocery store and bring it home, it was given by God to you. You can conscientiously practice using your gift, but it is the Lord who adds to your ability as you use what gift you have been given.

All spiritual growth is a gift from God. As we are obedient to the commandments and exercise or work on purposefully using our gifts, He enlarges our capacity and ability to comprehend and use those gifts to bring more joy and good into the world. In Matthew 5:36 the Lord says that we don’t have the ability to turn one hair black or white. Just so, we don’t have the ability to take unto ourselves spiritual power of our own will and choice. This ability is a gift of God.

When Jacob and Joseph accepted the calling from Nephi to teach their people the commandments, their ability to enlarge their calling came from the Lord. They took their calling seriously, even promising the Lord that if they did not do all in their power to teach the people with their whole souls that He could answer the sins of the people on their heads (Jacob and Joseph). Now that is commitment to a calling!

As Jacob and Joseph performed the duties of their calling by doing everything in their power to not overlook anything or any particular of their responsibilities, the Lord blessed them, and the people, with increased spiritual awareness and sensitivity. When Jacob 1 opens Jacob is not telling us what he personally decided to teach the people. He tells us that he went to the Lord and obtained his errand, his subject matter for his sermon, from God. In his concern for the welfare of his people, he was diligent in seeking the aid of the Lord in knowing what He wanted taught to the people for their own benefit.

As we magnify our callings, we won’t always have it easy. It pained Jacob to have to confront his people with their sins. He was a spiritually sensitive soul, and knew that his assigned subject matter was going to cause a lot of grief among those who had been hurt because of the sins of their spouses and fathers. Yet he was true to his instructions and promptings and followed the Spirit in all things, addressing the people even when it was a painful thing to do. Jacob was blessed precisely because he was willing to do what was required of him by the Lord. When we magnify our callings, it might be more appropriate to say that as we faithfully perform the duties of our callings the Lord magnifies us.

I find it interesting that the Nephites were always so obsessed with riches. It wasn’t like they had other nations to compete with, it was just their own society. Yet by going out and finding precious ores they were able to elevate their personal standing in society and live a more comfortable life. In a culture where your life could end at the tip of a sword in a moment, one would think they would have had a better grasp on the temporary nature of mortality.

The cares and desires of the world were always at the forefront of Nephite thinking. They even began to embrace the practices of those ancient kings, David and Solomon who, even after being given so much from the Lord, broke His commandments and took to themselves more wives and concubines than was legally allowed by the Lord. This obsession with carnal satisfaction was destroying the families of the members of the Church. The behavior of the husbands was a betrayal of their vows to their wives and children.

As we have been told today that marriage is between ONE man and ONE woman, so too did Jacob have to reiterate that principle. The Lord makes a clarification in verse 30 of 2 Nephi. He tells them that if He wants his people to increase, to “raise up seed” then he will command the practice of plural wives, but otherwise, there is to be only one wife. And what does he call the practice of having more than one wife if He has not commanded it? Whoredoms. It is important to remember that whatever the Lord commands is right. The laws change from time to time based on His wisdom and His commandments, not our own desires.

Looking beyond the mark

Perhaps I am the only one on the planet to assume that the gospel as we understand it today has only existed since 1830. I have always assumed that the prophets of old had only a small portion of the truth, and that portion changed from generation to generation. This is a false notion that I realized only a few years ago. The gospel of Christ has been the same from the time of Adam til today. The principles of salvation have not changed from generation to generation or from prophet to prophet.

What we understand from one prophet to another is colored by their manner of speaking and by their cultural devices, but the truth of the doctrines is eternal. Here is an example. In Doctrine and Covenants 93:24 it defines truth this way, “And truth is knowledge of things as they are, and as they were, and as they are to come.” We understand this easily because it is plainly written in our current language. Here is how Jacob defines truth in his culture (Jacob 4:13):

13 Behold, my brethren, he that prophesieth, let him prophesy to the understanding of men; for the Spirit speaketh the truth and lieth not. Wherefore, it speaketh of things as they really are, and of things as they really will be; wherefore, these things are manifested unto us plainly, for the salvation of our souls. But behold, we are not witnesses alone in these things; for God also spake them unto prophets of old.

All the parts are there, truth as it is, was, and as it will be. Jacob presents them in a different order, but they are still there.

The point is this, the sin of Israel that has followed us for millennia is that we tend to want to understand deep things before we can comprehend simple things. The Lord says, “Look!” and we try to look past where he is pointing us to. He marks the path, but we try to see beyond what has been marked as our path to things we cannot comprehend. We seek to look and feel smarter and more important than we are.

The Lord has always given his children what their hearts desire. If what He gives us isn’t sufficient then we are given things that will dam us, because we asked for it. The truths of the gospel are simple. We complicate them because we are not humble and seek understanding by the Spirit. The Lord says, ‘See this tree?’ but all we can see is the whole forest. Jacob tells us, as he told his own people that we need to humble ourselves and believe the writings of the prophets, and don’t read into their words things they did not intend to be there.

The gospel of Christ is plain. It is simple. Yes, there are mysteries, but remember that they are mysteries only to those who don’t understand them. To those who do not yet have a testimony of tithing or the Word of Wisdom, they are mysteries. Only when we have humbled ourselves and have elected to believe, at face value, the words of the Lord that if we do such and such that He will bless us, will we have the truths we seek for revealed to us.

The process of receiving answers to prayers has never changed. Adam received answers the same way your great grandchildren will receive answers. We all have to submit to the word of God, exercise our belief in His words through good works, then humbly ask for answers. By learning to listen to the Spirit those answers will be revealed to us in one way or another.

It is this process of being obedient, and exercising faith that we overcome our carnal desires, the lusts of the flesh. This process teaches us of the equality and importance of all mankind in the sight of God. It also reveals truth to us as quickly as we are prepared to receive it. The more we seek for the kingdom, to perform our Father’s will by blessing the lives of His children, the more He will magnify us in His and their sight by giving us greater abilities to be and to do good.