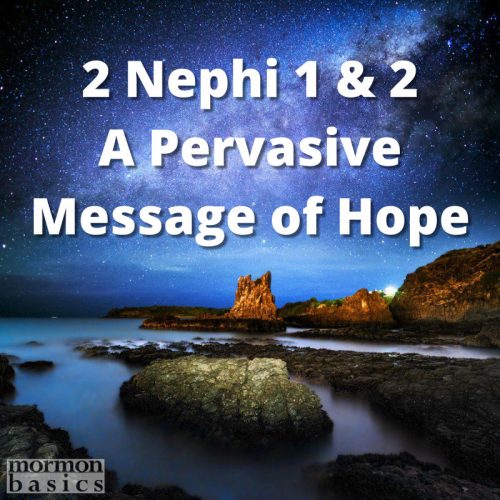 2 Nephi 1-2 holds a pervasive message of hope. Sometimes we lose sight of that message in all the other details of the text, but this week I would like to point out the consistent and overriding message of hope Lehi is trying to help his sons to see through what he teaches them.

In 2 Nephi 1 Lehi teaches his sons how blessed they are because they have listened to the Lord. In verse 3 he reminds them how blessed they were to have been warned of the coming destruction of Jerusalem, enabling them to flee before the city was destroyed and the people killed or taken into captivity. In verse 4 he says he has seen in vision that Jerusalem had already been ransacked and the people taken. In verse 5 he expands the blessings they have received from the Lord.

5 But, said he, notwithstanding our afflictions, we have obtained a land of promise, a land which is choice above all other lands; a land which the Lord God hath covenanted with me should be a land for the inheritance of my seed. Yea, the Lord hath covenanted this land unto me, and to my children forever, and also all those who should be led out of other countries by the hand of the Lord.

Have they had it easy during the last decade or so? No. They suffered a lot in the desert and in crossing the sea, but look at what they had been given. The Lord had led them to a promised land, choice above all others. Lehi had received a covenant from the Lord that his posterity could live there forever. Notice that the Americas is a land of promise to “all those who should be led out of other countries by the hand of the Lord.” It wasn’t meant for Lehi’s children alone, but Lehi was still grateful to have a place in such a promised land.

Lehi has seen in vision that the day would come when his descendants would dwindle in unbelief and as a result of their rejection of the blessings of the Lord the gentiles would be brought into the land and it would be given to them instead. But instead of Lehi’s children being completely destroyed, the gentiles would scatter and smite the people of Lehi. Knowing this to be their ultimate future, he pleads with them to save themselves from personally having to experience such calamities. In verse 13 he pleads with them:

13 O that ye would awake; awake from a deep sleep, yea, even from the sleep of hell, and shake off the awful chains by which ye are bound, which are the chains which bind the children of men, that they are carried away captive down to the eternal gulf of misery and woe.

What is this deep sleep, this sleep of hell? What are these awful chains he refers to? In 2 Nephi 28:21, Nephi says:

21 And others will he pacify, and lull them away into carnal security, that they will say: All is well in Zion; yea, Zion prospereth, all is well—and thus the devil cheateth their souls, and leadeth them away carefully down to hell.

Sin is like a spiritual deadener. It makes us numb to the things of the Spirit. It is like someone who has been breathing spiritual carbon monoxide, they become lazy in spiritual things and drift away in spiritual slumber, their sins, like a dream becoming the only things that are real to them. Elsewhere in the scriptures these sins are referred to as flaxen cords, soft threads that are easily broken when there are only one or two, but almost impossible once we have been cocooned in them. These flaxen cords of sin are the chains that bind the children of men and carry them like captives down to hell.

That last paragraph was a decided downer. The Lord had been so wonderful in all that He had done for Lehi and his family that it is depressing that Lehi has to resort to such pleadings with his sons. This is why he pleads with them to wake up from their spiritual sleep, to arise from the dust and be men. He wants them to claim the wonderful blessings the Lord is offering them in this new land.

The mechanics of the redemption of mankind

2 Nephi 2 is addressed mainly to Jacob, Lehi’s firstborn son in the wilderness, but the lessons are for all to learn. He explains to Jacob how the plan of salvation works. If you haven’t read any of the three articles I have written for ldsblogs.com on 2 Nephi, I strongly recommend reading them. What I say here is but a brief taste of what is talked about in those articles.

God established laws that would ultimately lead to his children’s ability to return to him after their mortal experience. Unfortunately, these law that would redeem us also cut us off from His presence forever. All it takes is one mistake and we cannot return home. Such is the mastery over the laws of God that is required to live in his presence. So the end of the laws, the reason or purpose of the laws is to help us come home. They are also the cause for our being separated from God forever.

Since our Father can only directly show us justice, as he is the universal law giver, it takes someone else, a Mediator, to step in and pay our debts for the laws we break. Only he can directly offer mercy, the terms by which we can be forgiven of our debts. This is the role of the Savior. To fulfill the Father’s plan to bring us all home, Jesus had to atone for our sins then die for us so he could be resurrected and bring the gift of resurrection to all of us.

In case it hasn’t entered your thinking yet, Christ is the center and source of all our hopes of redemption for our sins. Only in and through his atoning sacrifice can we find forgiveness for our wrongs. Only in and through His grace can the Spirit change our hearts and mold our souls into the kind of people we need to be in order to walk confidently back into the presence of our Father in Heaven. This is the message of hope Jesus brings to the whole human race. Verse 8 of chapter 2 says:

8 Wherefore, how great the importance to make these things known unto the inhabitants of the earth, that they may know that there is no flesh that can dwell in the presence of God, save it be through the merits, and mercy, and grace of the Holy Messiah, who layeth down his life according to the flesh, and taketh it again by the power of the Spirit, that he may bring to pass the resurrection of the dead, being the first that should rise.

It is because of this payment Jesus made on our behalf that he has the rights to judge our souls in the day of resurrection. Because he paid the price to redeem our souls, our Father has given all rights of judgment to Him to reclaimed us from our fallen state. It is true that those who reject his payment in their behalf will have to suffer as He suffered, but even then they will be given a kingdom of limited glory. Almost all who come to earth will receive a kingdom of glory.

The question is, how much glory do each of us want? The judgment will restore good for good and evil for evil. In the end, what we receive for a judgment will reflect how we chose to live our life. If we have sought to follow Christ in all things then all that is good will be restored to us. If we have chosen to live for the pleasures of today, and to do those things that are convenient to us then we will receive a lesser glory that does not include the responsibilities of exaltation and family.

These two chapters do not hide the fact that disobedience will bring punishments and a lack of blessings. But this is not the point of these words from Lehi. Lehi is pointing out to his sons that the Lord has done everything possible to pave the way and make it possible for us to return to Him. All things have been done in love to give us a message of hope.

Our Father in Heaven and our Savior have gone to great lengths to make sure we are able to repent, that we know how to repent, that we understand the blessings of repentance, and that we are able to understand the glorious views and possibilities before us when we do repent. The only thing that limits our ability to learn and understand how this glorious plan of happiness works is our own degree of spiritual slumber. Awake and arise!