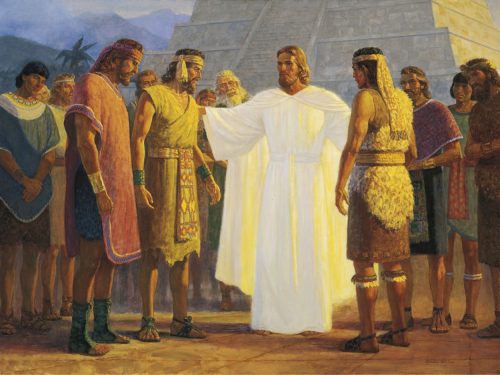 There is a lot that can be said about this week’s lesson. We start off with the Sermon on the Mount, followed by instructions on how to pray and lay up treasures in heaven. Instructions to the priesthood leaders follows that, and the day is concluded with a sermon on how to behave, and on the fulfilling of the law of Moses. That’s a lot of information!

There are so many detailed instructions in the Sermon on the Mount, which includes the Beatitudes, that it is impossible to cover even a small number of the subjects addressed by the Savior in the four chapters for this week’s reading. Instead of trying to write on each little subject, it seems to me to be of greater worth to address the bigger pictures of these chapters.

Here is the rundown of each chapter’s topics:

Chapter 12 – Sermon on the Mount and Beatitudes. A somewhat vague announcement that old things are “done away,” because all things are now new. The command to be perfect. This chapter is basically about how we should be as people.

Chapter 14 – Jesus gives more instructions to the multitude about how to behave, and a warning of false prophets and how to identify them. He teaches the people how to be wise in spiritual things.

Chapter 15 – Jesus gives further clarification about the law of Moses being fulfilled, because the people are confused by what he meant when he said earlier that old things had been done away.

See how much of these chapters is about our behavior? This seems to be the focus of almost everything the Lord says in these chapters, whether he is speaking to the multitude or to his Disciples. Going from the law of Moses to the law of the Gospel is all about a change in our behavior. The Sermon on the Mount is also all about being, meaning not just our behavior, but what kind of people we are.

We have only been taught the law of the Gospel, so it can be difficult for us to see what the problem was for the early Saints who had to make the transition. We only see and understand where they were headed, not where they were and where they came from. Everything about their life view and their way of worshiping was being changed for something less based on physical performances and physical duties to more based on attitudes and changes to their character.

To be the salt of the earth

First, let’s look at 3 Nephi 12:13 as we examine the Lord’s desires for our behavior and our attitudes.

13 Verily, verily, I say unto you, I give unto you to be the salt of the earth; but if the salt shall lose its savor wherewith shall the earth be salted? The salt shall be thenceforth good for nothing, but to be cast out and to be trodden under foot of men.

Salt is right up there with water for its treasure trove of uses. Salt corrodes, it preserves, it flavors, and it changes or alters other flavors. Historically, salt was so valuable that there was a time when Rome used salt to pay its soldiers instead of money. When the Savior tells us that he gives unto us to be the salt of the earth, he is basically saying that his gospel can make us into the best kind of people. We become universally useful to those around us.

But what happens if salt is corrupted by diluting it with something else or altering its makeup? When it is no longer pure it loses its usefulness and is good for nothing. At that point we toss it out as worthless. The Saints are given a way to be representative of the best society has to offer. The principles of the gospel teach us how to be honorable, kind, honest, dutiful, responsible, and charitable. But if we corrupt Christ’s teachings we lose those properties that make us so valuable to society, and we, like the corrupted salt which has “lost its savor” or ability to flavor, are good for nothing but to be cast out.

To solidify his point about the salt, the Lord goes on to compare those who accept and live his doctrine to being like a candle (3 Nephi 12:14-16).

14 Verily, verily, I say unto you, I give unto you to be the light of this people. A city that is set on a hill cannot be hid.

15 Behold, do men light a candle and put it under a bushel? Nay, but on a candlestick, and it giveth light to all that are in the house;

16 Therefore let your light so shine before this people, that they may see your good works and glorify your Father who is in heaven.

Once we have been taught the doctrine of Christ, and live it, we become an example to others. Examples are not meant to be hidden, but set up where all can see them. Just as salt is meant to flavor and preserve a wide variety of foods, so the candle is meant to be set on a hill for all to see, not hidden under a bushel basket where none can benefit from its light.

The point here is that when we take into our lives the principles and behaviors taught by Jesus in the Sermon on the Mount our lives should change for the better. That is what those teachings are designed to help us do. These changes are not just a difference in habits or performances before the law, but are meant to change and improve our characters. In other words, instead of performing a ritual and calling ourselves righteous, now the Lord wants us to actually be righteous as he is righteous, pure as he is pure, and holy as he is holy. This new law is at an entirely new and higher level than the old law of Moses.

Replacing the law of Moses

We see the law of Moses as a dead law. Why? Because we have been raised on and taught the law of the gospel given to us by Jesus. We no longer have any use for the law of Moses. The people in Christ’s day, however, only knew the law of Moses. The law was their gold standard. Everything they came in contact with was measured against the rules and customs that had arisen about the law. The Jews had completely lost sight of the reason for the law being given in the first place.

The law was given because the children of Israel were too weak in their faith in God to handle anything higher and more holy. Because they rejected the higher law Moses brought down from the mountain, Moses had to go back to the Lord to receive a law they could be taught to live. Lest we be too harsh on the Israelites, remember they had been slaves in a pagan society for close to 400 years. They really had little working knowledge of the God of their fathers. It would take time for them to be taught and to develop faith in him. There was so much ingrained in their Hebrew society that had to be rooted out. It would take many generations to prepare them to live a higher law.

While there were some who comprehended the purpose of the law of Moses and looked forward to the coming of their Messiah, the Christ, most continued to return to the pagan ways, and over many generations corrupted the law they had received from Moses. This was the state of the Jews Jesus was born into. So, when Jesus taught that the law was no longer necessary, many of those who believed in Jesus were like deer in the headlights. They just couldn’t process that kind of information. What could there possibly be without the law of Moses? Their whole society was defined by its customs and traditions. How could you say that it was supposed to be cast aside and something new should take its place?

It seemed that Jesus could say the words, but those words weren’t sinking into the minds and hearts of most of the people. Some got it, like the apostles, but many struggled with the notion of living by a different law without comparing it with and trying to bind the new teachings to the law of Moses.

The wise man and the rock

Just as there is no way back to the Father, except through the atoning sacrifice of Jesus, there is no other way to build a life that is eternally stable and sound, except through living Christ’s teachings. Any kind of life that is not build upon the principles and teachings of Jesus, the Christ, is built upon spiritual sand. And we all know what happens to sand when it is hit by rain, wind, and floods – it gets carried or blown away, taking everything that was build upon it with the wind and the flow of the water.

The way I see it, the focus of all that Jesus taught the people of Nephi was centered around the changes the law of the gospel creates in our life. We become different people by living and keeping his commandments. To the people of Nephi, not only was the law they were to live new, but they would become new people as well. This is not unlike the change that takes place in the soul of each person who hears the gospel message and comes out of the world and into the light of the Spirit. They change in fundamental ways as they become new creatures in Christ.