BoM Lesson 09 – The Words of Isaiah

BoM Lesson 09 – The Words of Isaiah 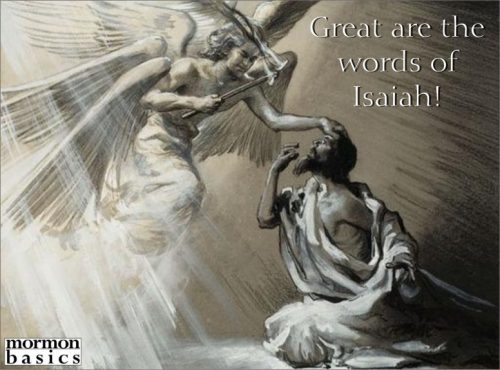 The scriptures tell us that “great are the words of Isaiah.” What they also tell us is that it takes the spirit of prophecy to understand his words. Isaiah was a very educated man. He spoke in great symbolism about the covenant God made to Abraham. Almost all of his prophecies involve the treatment of Israel in his day, as well as the Lord’s treatment of Israel down through time until the last days when they are restored to their birthright and the Savior returns to rule personally on the earth. Since much of what happens to Israel is repeated more than once from generation to generation, many of his prophecies can be interpreted to refer to more than one time period. This makes clarity in reading his words difficult at best.

The use of symbols

The Lord uses symbolism to teach us all the time. Isaiah is a master at using symbolism in his writings. He is so good at it that he is the most quoted prophet in any dispensation of time. Even the Savior quoted more from Isaiah than from any other prophet. Let’s look at a symbol from last week’s lesson that will help explain the use of symbols in Isaiah’s writings. Here is 2 Nephi 9:14.

When we are resurrected and the veil of forgetfulness is completely removed, we will have a perfect memory of everything we have ever done. We will see ourselves and our behavior for what we truly are. There will be no hiding our sins in that day. For those who remain in their sins from lack of repenting, they will feel exposed or naked before the Lord. There will be no hiding their sins then. But to those who have repented through the merits of the Savior’s atonement – the word atonement mean “to cover” – their sins will be covered, as it were, with a robe of righteousness. Their sins are hidden by their personal righteousness through the atonement of Christ. So their righteousness covers or hides their sins, like a robe, protecting that person from the judgment of the Lord. They are considered pure before Him.

The idea of our personal righteousness covering our sins like a robe never occurred to me until I studied for that particular lesson. All my life I had wondered what a robe of righteousness was. Now I final comprehend that the atonement, like a robe that covers our nakedness, covers our sins and hides them from the laws of God that demand reparation for the laws we have broken. That covering was done through the Atonement. It can do this because we have repented and the mercy of Christ is able to protect us by “covering” our sins because of our obedience. This is how God’s grace works.

In this week’s reading assignment Isaiah uses symbolism at every turn of a phrase. Learning what some of the phrases mean helps to increase comprehension of Isaiah’s prophecies, but it really does take the Spirit to open our minds a little at a time to more completely understand the full import of what he is saying. For example, in 2 Nephi 16:4 – 7, he mentions that the Lord’s house was full of smoke. Generally, in prophecies, the smoke that is ever present before the Lord represents the prayers of God’s children rising up before him.

4 And the posts of the door moved at the voice of him that cried, and the house was filled with smoke.

5 Then said I: Wo is unto me! for I am undone; because I am a man of unclean lips; and I dwell in the midst of a people of unclean lips; for mine eyes have seen the King, the Lord of Hosts.

6 Then flew one of the seraphim unto me, having a live coal in his hand, which he had taken with the tongs from off the altar;

7 And he laid it upon my mouth, and said: Lo, this has touched thy lips; and thine iniquity is taken away, and thy sin purged.

Isaiah says he is a man of unclean lips, and lives in the middle of a people of unclean lips. A person of unclean lips is a sinner, one who has perjured himself or lied. The live coal represents the baptism of fire or being forgiven by the Holy Ghost. But there are several ways one could explain what the altar is and what it represents. This is where personal revelation comes in. Over time, the more we read the words of Isaiah the more we come to appreciate his ability to craft such eloquent descriptions and to overlay principles with prophecies in the same sentence. Isaiah is, one might say, an acquired taste.

In 2 Nephi 12:2 – 3 Isaiah refers to the “mountain of the Lord.” Anciently, when there were no temples to be found, revelation was usually received by the prophets on the tops of high mountains. Mountain tops were sacred places where communion with God took place. The Salt Lake Temple was the “mountain of the Lord” and was built in the tops of the Rocky Mountains. From this place, which became the headquarters of God’s kingdom on earth, went the word of the Lord to all the earth, and people from all over the world made their way to the temple to receive their covenant blessings.

As you read the chapters for this lesson, prayerfully look for these proofs given by Nephi. He has purposefully included these chapters of Isaiah because they provide the proofs he desires to give his people. Isaiah focuses on the covenants the Lord made with his people Israel. God never hides the fact that because of their own disobedience they will be scattered, smitten, driven, and hated. But he also never hides the fact that, because of the faith of those with whom the covenants were made, He will, in the last days, redeem his people. He will gather them back to their promised lands and restore them to their proper place. He will use the gentiles to perform this work. Those gentiles, for the most part, are we who are the current members of the Church.

Another support for Isaiah

While it is true that Isaiah writes extensively about the destiny of Jacob’s descendants (the man who’s name was changed to Israel), other prophets that are easier to understand also write about the destiny of Israel. If you study the words of other prophets and see what they say will happen in the last days with Israel, you will be able to go back and reread the words of Isaiah, and as you do you will begin to recognize that he is talking about the same prophecies and events referred to by the other prophets.

Both Nephi and Isaiah are all about the atonement of Christ. It is the covenants that exist between God and his children that brings us joy and delivers us from an eternity of enslavement to Satan. One of the purposes of both Isaiah and Nephi in talking about not only Israel’s past, but also its future, is that they want all of Israel to know that the Lord is mindful of them always. He may have to punish them because of their disobedience, but they will not be cast off and forgotten. The Lord will never abandon the covenants He made with Abraham and his descendants. Because of all these faithful prophets the Lord has sworn that He will spare their children, even if they have to wander and be punished for a long period of time. In the end He will redeem their posterity and give them rest in their promised lands.

This ultimate message of joy and redemption is what the prophets are trying to convey to the people. They are trying to teach each of us that our blessings always rest and are based on our personal obedience to the commandments. Their overarching message to all Israel is that God loves his children and has his arms of mercy extended always towards them. All they (we) need to do is to come to God, accept his ways, receive His blessings through obedience, and we will find joy in our lives, and the Lord will protect us we become his people.