Bending the Rod of Iron

Bending the Rod of Iron

In the  Book of Mormon the prophet Lehi has a dream in which he sees an iron rod that leads to the Tree of Life. Those who grab hold of this rod of iron, don’t let go for any reason, and press forward along the path, eventually arrive at the tree and are able to partake of the tree’s fruit, which is most precious above all. By revelation, his son, Nephi, tells us that the fruit of the tree is the love of God, and that the rod of iron that leads us to the love of God is the word of God.

The path that leads the seeker to the Tree of Life is referred to as “strait and narrow.” That is scripture talk for strict or constrained, and narrow. In other words, he used two words that mean basically the same thing. Strait does not mean the same thing as straight, which means not bending. Strait means a confined area or something that is strict, as in requirements or principles. The point of using words like this is to show us that the path to God is not wide, with lots of “wiggle” room. In other words, we can’t pick our own path or wander from side to side along the path. The path is very well defined, and does not allow for meandering. The path is not open to interpretation. As soon as we start to wander, we leave the true path and enter onto other paths that lead away from the destination of the Lord’s path. It only takes one step to the right or the left to leave the strait path. 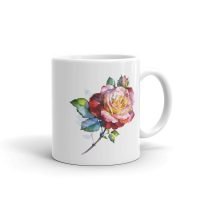 Click the picture to learn more about this series of watercolor mugs.

The rod of iron, the word of God that leads us down this path has no room in it for “wandering” either. The rod of iron lies completely within the narrow path the Lord has given us so that by clinging to His words we will be brought directly to experience God’s love and taste of its sweetness. God’s love is the one thing in all of life that truly satisfies the soul completely. There is nothing else that can do what the love of God can do for us. That is why it is most precious above all.

Let’s look at an example of an important doctrine that people have tried to take out of the strait and narrow path and put into a much wider path that is full of interpretation. Let us talk about the origin of man. In 1909, when Joseph F. Smith was the prophet of the Church, there was a lot of discussion about the origin of man. Darwin had published his theory of evolution, and the idea of Creationism (intelligent design of the universe) was being called into question. I want to talk about this particular subject, not because of the subject, but because it will illustrate the principle I want to make in this article that gives it the title of Bending the Rod of Iron.

At odds here is the scientific community and the Christian community. The one saying that life was accidental, and developed along a path of evolution, and the other saying that God, the creator of the universe, made us in His image, and that we have always been this way. There was no evolution of our species as described by the evolutionists. In an Improvement Era article that was written in 1909 by the First Presidency of the Church, President Smith made some very pointed remarks about evolution. I have pulled quotes from the article and have put them in the order in which they were said, though they are actually scattered throughout the article. I encourage you to click the link at the bottom of the page to read the article for yourself. For now, please read these quotes so I can point out a few things about what he says to the members of the Church.

“To tell the truth as God has revealed it, and commend it to the acceptance of those who need to conform their opinions thereto, is the sole purpose of this presentation.”

“Truth has but one source, and all revelations from heaven are harmonious with each other. The omnipotent Creator, the maker of heaven and earth, had shown unto Moses everything pertaining to this planet, including the facts relating to man’s origin, and the authoritative pronouncement of that mighty prophet and seer to the house of Israel, and through Israel to the whole world, is couched in the simple clause: “God created man in his own image””

“All men and women are in the similitude of the universal Father and Mother and are literally the sons and daughters of Deity.”

“It is held by some that Adam was not the first man upon this earth and that the original human being was a development from lower orders of the animal creation. These, however, are the theories of men. The word of the Lord declared that Adam was “the first man of all men” (Moses 1:34), and we are therefore in duty bound to regard him as the primal parent of our race. It was shown to the brother of Jared that all men were created in the beginning after the image of God; whether we take this to mean the spirit or the body, or both, it commits us to the same conclusion: Man began life as a human being, in the likeness of our Heavenly Father.”

“Man, by searching, cannot find out God. Never, unaided, will he discover the truth about the beginning of human life. The Lord must reveal Himself or remain unrevealed; and the same is true of the facts relating to the origin of Adam’s race—God alone can reveal them. Some of these facts, however, are already known, and what has been made known it is our duty to receive and retain.” [emphasis added]

President Smith says no less than four times in those paragraphs that we are “duty bound” to “conform” our opinions to the revealed word of God. I like this sentence from the quotes, “Truth has but one source, and all revelations from heaven are harmonious with each other.” All scriptures teach us of only one truth, and that is the true origin of our parentage. We are offspring of God, and since gaining our spirit bodies have always had human form. That fact is consistently stated throughout all of the scriptures.

We are not permitted to “bend the rod of iron” to meet our own desires or beliefs. President Smith says in the first quote above that we need to conform our opinions to the truth as God has revealed it. To take the truths, as revealed through the prophets and the scriptures, and make them fit a private philosophy is to wrest the scriptures. If you have seen a wrestling match, you have a good visual. To wrestle is to forcibly twist or turn, to wrench one way or another. To wrest scripture is to redefine the truths of holy writ to match the philosophies of men. We have many warnings in the scriptures against wresting the scriptures, which always leads to destruction. 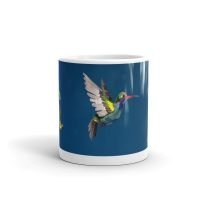 Click the picture to learn more about this series of watercolor mugs. This image wraps all the way around the mug.

The point of this article is this: We have the revealed word of God. As those who have made covenants with God to live by every word that comes from his mouth, we are in fact, duty bound to believe him when he says something. We are duty bound to conform our lives and our actions to His teachings. If the prophets tell us, that humanity came to earth as full-fledged humans, and not some lesser beings that evolved into humans, then that is what we are obligated to believe. Bending the word of God or the iron rod to include the teachings of the world is not an option.

The principle is the same for any doctrine or belief. We are duty bound to conform our opinions to those of the Lord’s. The rod, the word, like the path that leads to the love of God is strait (strict) or narrow. It is not open to revision and reinterpretation. The blessings of the Lord come from submission and conformity to the laws that bring those blessings, not from personal interpretation and co-mingling of scripture with the philosophies of the world.

Below are three sources for this article. I strongly encourage you to go and read all of them. The first one is the First Presidency Message as printed in the Ensign Magazine in 1909. The second one is the entry on Scripture Study on churchofjesuschrist.org. There is a whole section on what it means to wrest the scriptures. Both references are highly informative and well worth your time. The third is a short article from the New Era from 2016.

Message from the First Presidency on the origin of man
http://www.churchofjesuschrist.org/ensign/2002/02/the-origin-of-man


Here is a short article from the New Era from 2016 about evolution you might find interesting.