On the Backs of Israel

On the Backs of Israel 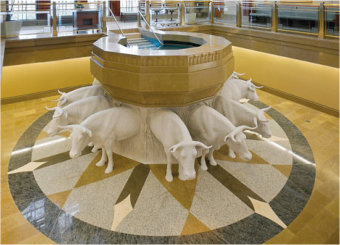 In every temple is a baptistry. The baptismal font sits on the backs of twelve oxen, three each facing symbolically north, south, east, and west. As I stood looking at the oxen in the baptistry one day it occurred to me that they are symbolic of the children of Israel in several ways.

The ox as a beast of burden

In the United States of America the main work animal on farms has been the horse. We may say that someone is as strong as an ox, but we always say that someone worked like a horse. In Europe and other places in the world, it is the ox that is the beast of burden. The ox is used to plow the fields, turn the sod, uproot trees, drag boulders, and pull carts and wagons. The ox is not necessarily the smartest of beasts, and the farmer cares for their oxen (plural of ox) as we would care for our horses in the US.

For extra heavy work a double yoke is used (I’ll just refer to it as a yoke). A yoke is a large wooden beam that has been shaped to go over the shoulders of two oxen so when they pull, they don’t pull too far in different directions. By keeping them facing the same direction their power is magnified and more work gets done. It is precisely because the ox is viewed as a heavy work animal that Christ compared the work of his followers to oxen and encouraged us to take upon us his yoke, because his yoke is easy and his burden is light.

The power of the yoke is that you can carve the yoke so that two oxen of unequal size or strength can both pull comfortably, without one ox having to pull the other one along with it. In Matthew 11:28 – 30 the Savior invites all to come to him. He wants each of us to share his or her burden with Him. Christ has always promised rest to the souls of anyone who seeks him out.

28 Come unto me, all ye that labour and are heavy laden, and I will give you rest.

29 Take my yoke upon you, and learn of me; for I am meek and lowly in heart: and ye shall find rest unto your souls.

30 For my yoke is easy, and my burden is light.

The ox and Israel

The symbolism of the ox and its association with the house of Israel is most prominently displayed in the font in the temple of Solomon. This is the sea (large basin) used to wash the priests clean of all the blood from the sacrifices. Hence, it is also used for baptisms, which uses the blood of Christ to wash away our sins to make us clean.

In Revelation 21:11 – 13 John the Revelator describes the heavenly city. In this description we are told specifically that the twelve gates of the city, three each facing the four points on the compass, represent the twelve tribes of Israel.

11 Having the glory of God: and her light was like unto a stone most precious, even like a jasper stone, clear as crystal;

12 And had a wall great and high, and had twelve gates, and at the gates twelve angels, and names written thereon, which are the names of the twelve tribes of the children of Israel:

So the twelve tribes of Israel are represented in the scriptures as not only the twelve oxen under the baptismal font, baptism being the gateway ordinance to the celestial kingdom, but the names of each tribe are inscribed on the twelve gates of the celestial city. Either way, you have to go through the house of Israel to enter the Lord’s Church or his city.

Comparison of Israel to Oxen

With the Lord nothing happens by accident; he plans out everything. The ox was chosen to represent the tribes or families of Israel because, like the ox, Israel’s children had work to do. Luke 12:48 says, in part, “For unto whomsoever much is given, of him shall be much required …” Just as the ox was expected to do all the heavy work for man, so the house of Israel is expected to do the Lord’s heavy work in the kingdom.

Israel represents those with whom the Lord has made covenants. Anyone who is baptized in this dispensation who is not a blood descendant of Abraham is adopted into the family of Abraham through the covenants they make with God, starting with baptism. In return for all the blessings of exaltation promised to those who are faithful to their covenants, the Lord requires that we do certain things to qualify for the ultimate blessings. It goes back to the statement that where much is given, much is required.

As covenant makers we have promised to do missionary work for both the living and the dead. We promised to carry one another’s burdens, to mourn with those that mourn and comfort those that stand in need of comfort, and to stand as witnesses of God at all times and in all places we may be in (Mosiah 18:8 – 10). And this is just for starters. When we go to the temple we promise to do even more. The Lord requires of his people that they be willing to give all that they have to build his kingdom. This requires total commitment.

Our burdens can indeed become great. That is why the Savior offers to share our yoke so that his superior power can help us pull our load, making the yoke easy to bear and the burden light. Just as the temple font rests on the back of twelve oxen, so the bearing of the message of salvation rests on the back of the Saints of God, the children of Israel. It is on the backs of Israel that the work of salvation shall be accomplished in these last days.

The scriptures are true. The yoke we are called upon to bear is a great work, and a heavy burden. We need not carry it alone. The work of salvation for the family of God is overwhelming, if we try to do it on our own. But if we come to the Savior and take his yoke upon us, in other words, accept the responsibilities to do the work of salvation for God’s children, he will lighten our load and give us rest to our souls. Now when I look at the temple font I see a representation of the covenants I have made with my God.

On the backs of Israel