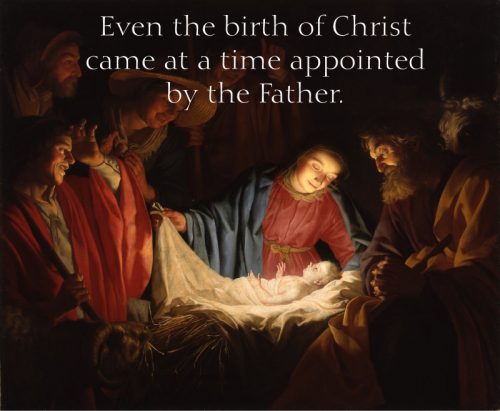 As I have mentioned before, there was a time when I thought it unfair that those who had to wait in spirit prison until the Savior’s advent into the spirit world had to wait an awfully long time. From Adam’s day to His was roughly 4,000 years. Surely the timetable of the Lord wouldn’t have made them wait that long.

It later occurred to me that I also had to wait a long time. From Adam’s day to mine was almost 6,000 years. Funny how that doesn’t seem as long as my perception of those who died in Adam’s day had to wait for their redemption from spirit prison.

We are taught in the New Testament (Acts 17:26) that the Lord established (assigned) each of us our time on earth and where we would live during mortality. So often I hear people talking and conjecturing as to whether we picked our families or whether we got to choose this or that about our earthly experience. Frankly, that doesn’t fit the Lord’s behavioral profile.

His kingdom is a kingdom of assignments. Since His choices are always best and always correct, I am guessing we were assigned everything, and were happy for the assignments. When we appreciate how much our Father in Heaven loves us and cares about us, could there be any doubt that His choices for us would be anything but perfect?

Prophecy is 100% accurate. Through the prophets we have been told that the Lord has planned out the movement and development of all the nations of the earth. The prophets have been able to foretell what will happen to the people of the earth from the days of Adam on down.

Look at the prophecies in the Old Testament about what would happen to Israel. For many, many centuries before the Assyrians took away the northern tribes of Israel, the prophets had been telling them that it would happen if they didn’t repent and stay humble. They also warned for centuries that the Jews in Jerusalem would be taken captive by the Babylonians, which they were.

I mention these two things to point out that the Lord knew even before the world was formed what would happen to His children during mortality. That is how he was able to foreordain the prophets and select His leaders who would be tasked to guide His children on earth. He already knew what would happen and when, so he reserved some of his children to come to earth at specific times so they could perform the tasks he had given them to accomplish.

Here are a few of the specific events in the history of the earth that were built into the plan of salvation. You will recognize them, and hopefully will see that the plan is all encompassing and completely thought through.

The list you just read shouldn’t have any surprises in it. These are things the scriptures and the prophets have talked about since, literally, time began. My point in listing these events is to show that the Lord has a timetable already set up for the macro or big events in history. But He also has timetables set up for smaller events in history.

Our lives each have timetables set up for them as well. This isn’t as easy to spot sometimes as the events of the global timetables are, but they are still there. The prophet Jeremiah demonstrates this beautifully in Jeremiah 1:5.

5 Before I formed thee in the belly I knew thee; and before thou camest forth out of the womb I sanctified thee, and I ordained thee a prophet unto the nations.

The Lord made it very clear to him that he was reserved for that particular day and time, and that he came to earth with specific things the Lord wanted him to accomplish. These types of references are found in several places throughout the scriptures. The prophet Joseph, who was sold into Egypt, prophesied that one of his descendants would do a great work for the children of God, and that his name would be Joseph also, and that his father would also be named Joseph. This refers to Joseph Smith, Jr. the prophet of the Restoration.

Lest you think that these prophets are special in that they received personal assignments from the Lord before coming here, I can assure you that all of us have been given assignments to complete in our time on earth.

Relating it back to the plan of salvation

Our time in mortality can often seem haphazard and chaotic. We don’t receive an email telling us that the Lord has such and such planned for us in three years, so we had better start getting ready for it. All these life events were mapped out before the world came into existence. We knew more about our lives before we were born than we know now, because we were there when our part was explained to us.

I say that like I know it was explained to us, but I am assuming it was. I have a hard time believing that the Lord would just require us to leave His presence with nothing more to go on than a “trust me” and an “I hope to see you later.” That just doesn’t feel like something He would do.

The blessing of recognizing that the Lord works on timetables is that we can be assured that during mortality the Lord is firmly in control, and is directing the affairs of men and preparing for those events His servants have been teaching us about for so many centuries.

This recognition also helps us to have greater faith in the Lord’s servants today. When they institute changes in the Church or announce new programs for the saints to live and work with, we can have great confidence that we are just following the Lord’s timeline for our day. In this regard we can truly say that all is well in Zion. Now we just need to roll up our sleeves and pitch in to get the work done.