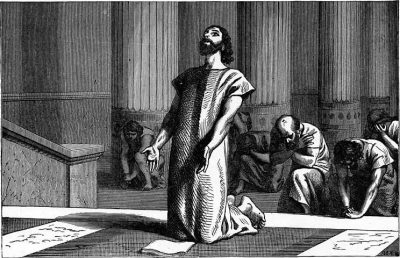 Sometimes we may be tempted to think that sophisticated arguments against trusting God is something invented in today’s society. These verses paint a very different picture.

When I read these two chapters I was enraptured, like I have never been before with these verses. In my mind’s eye I could see these arguments being played out in the world today against those who still believe in God. I have selected a majority of the verses of these two chapters to comment on.

The link below opens a PDF file with a running commentary on today’s chapters. Please read the selected verses in the first column then go to the commentary in the second column. Work your way down from left to right. I hope it will help you see things in these verses you might not have spotted before. If not, well then, you have reread some great verses from the Bible, and that is a reward in and of itself. 😀

Since WordPress can’t handle long or complicated tables or the type of columns I like to use, I had to go to my WordPerfect word processor to create the commentary. You can read the PDF file here:

After the commentary comments

Rab-shakeh was an intellectual, a diplomat, a politician, and a shark. In Book of Mormon days he would have been the equivalent of a Korihor or one of the other anti-Christs. He knew multiple languages, how to turn a phrase, and how to demoralize others to beat them into submission. He was crafty, and a very good liar. He deliberately aimed his speech to the Jews at the people. His chances of cowing them into submission were much better if he could plant the seeds of doubt in their mind and get them to rebel against their king.

Rab-shakeh knew that Hezekiah was enacting religious reform throughout his kingdom. Rab-shakeh’s job was to undermine his efforts and create chaos among the rank and file in the kingdom. From the reaction we see from Hezekiah’s servants, Rab-shakeh succeeded.

I mentioned in the commentary that those who reject God as being real or even relevant in their life are free from the confines of religious rules and regulations. It is God who gave us the 10 commandments. It is God who has given us the golden rule, and a thousand other instructions on how we are to behave one towards another. Once you reject God and His place in the universe, you are truly free from all the rules that go with believing in Him. As least that is how it appears on the surface of life. And those who reject God only see life as being the short time from birth to death. To them there is no afterlife that we need worry about, because it doesn’t exist.

Those who reject the notion of a living, breathing God feel they are “free” to do as they wish in life. All constraints from commandments are set aside. No wonder when people leave the Church they sometimes say they feel free for the first time in their life. What they don’t see is that there are plenty of people still living who have a knowledge of that afterlife these free people have dismissed. There are those who know of God’s grace and kindness on a personal level. They have put His promises to the test and have a knowledge of His existence, because the Spirit has spoken to them. This is what Hezekiah experienced in his day. He was a voice of testimony to the people that God was real, loving, and demanding. He honored Him and worshiped him in reverence. Hezekiah recognized that the gods of all nations were manmade, except for the one true  or real and living God whom he worshiped.

Just as in the Old Testament, the philosophies of the world today tell us there is no such thing as a true and living God (meaning that there is no such thing as a REAL GOD). To the intellectuals of the world all religions were invented to bring comfort in times of distress, and hence all gods are also manmade. Religion to these people serve to control the believers by the tenets their religion teaches. The world sees religion as a bondage, a way to keep the practioners in line. I believe the line goes something like – “Religion is the opiate of the masses.”

The lesson I have learned from today’s chapters is that exercising faith in God sometimes comes at great cost. Hezekiah must have felt pretty alone in his faith. He had to impose his beliefs on his people, because he believed that only by worshiping the one and only true God could they be saved from destruction. He believed the prophets of old, as well as the living prophet of his day. He was willing to be obedient, even in the face of public skepticism and possibly ridicule.

Hezekiah feared God more than man. The most powerful force on earth in Hezekiah’s day was the king of the Assyrians. This king was mocking him publicly, and threatening to use force if necessary to get the Jews to submit to Assyria. But Hezekiah was more concerned with pleasing God than he was that this all-powerful king might be able to harm Hezekiah’s people. In all these tests of his faith he consistently turned to God first and foremost for comfort. He also consistently sought out the counsel and direction of the living prophet.

Isn’t it nice to know that some things in life always work? Some things never change. If we put God first in our life, and always seek out the wisdom of God’s representatives on earth, we will be blessed. Hezekiah didn’t have the opportunity to hold the Melchizedek priesthood or to have the gift of the Holy Ghost. We do. Counsel from God is just a prayer or Conference talk away. God’s comfort is what we are promised if we are faithful to Him above and beyond any other entity on earth.